In previous weeks I have written about the Greater Angle-wing Katydid and the Lesser Angle-wing Katydid, but there are four other species in the U.S. One of these, Microcentrum californicum, is found commonly in Arizona, and the length of California west of the Sierras. 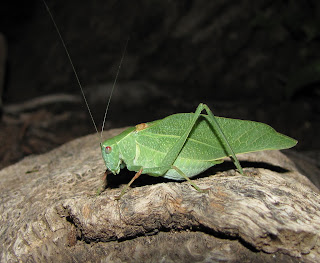 The California Angle-wing Katydid is the smallest member of its genus, adults ranging from 41-52 millimeters. Note that the male has a brown stridulation area (its “shoulders”) like the Lesser Angle-wing, but its geographic range leaves no room for confusion.

The specimen shown here was attracted to a blacklight set up in Peppersauce Canyon in the Catalina Mountains of Pima County, Arizona on September 2, 2011. There was also a female Greater Angle-wing found in the same location on the same night. 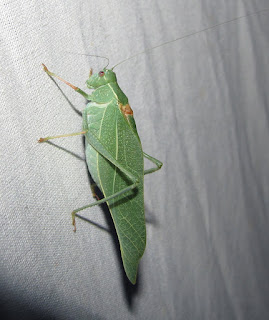 The remaining Microcentrum species include M. louisianum, the Louisiania Angle-wing, found from Louisiana and Mississippi north through parts of Arkansas and Tennessee to the bootheel of Missouri. Microcentrum minus, the Texas Angle-wing, is found only in extreme south Texas; and the Southwestern Angle-wing, M. latifrons, is recorded from the Big Bend area of Texas and the southeast corner of Arizona.