One insect that can be found at virtually any time of the year is the colorful Small Milkweed Bug, Lygaeus kalmii. Contrary to its common name, this insect feeds on a variety of plants, not just milkweeds. The adult bugs overwinter and often emerge from cracks and crevices on warm winter days. I found one here in Colorado Springs just last week (January 21), in our backyard. 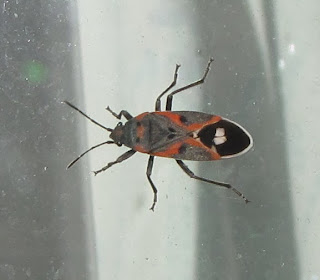 The Smaller Milkweed Bug does not even confine itself to vegetation. It is an opportunistic scavenger on dead insects, and may even prey on the eggs of the Swamp Milkweed Beetle (Labidomera clivicollis), larvae and pupae of the Monarch butterfly, and on other insects trapped by the sticky pollenia in milkweed flowers. I once spotted a pair of adult Small Milkweed Bugs sharing a dead honeybee on a curb in Tucson, Arizona. Adult bugs also feed on the nectar of flowers 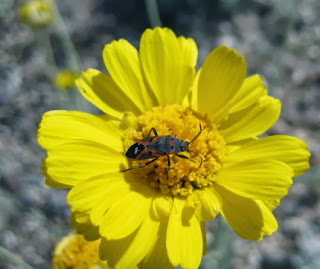 These are not large or otherwise imposing insects. Adults measure about 10-11 millimeters in body length. The bright red, black, gray, and white colors warn of the toxic properties of L. kalmii. The bugs, in the nymphal stage, preferentially feed on milkweeds (Asclepias spp.), and so ingest the plant’s defensive chemicals. The bug is not only impervious to the effects of these noxious compounds, but actually sequesters them in special compartments along the edges of its abdomen and thorax.

The chemicals, known as cardiac glycocides, are known to trigger heart arrhythmias and other distressing if not potentially fatal consequences in vertebrate animals. No surprise then that the Small Milkweed Bug is seldom if ever a victim of vertebrate predators; and even spiders and predatory insects tend to avoid them.

Milkweed bugs are in the family Lygaeidae, collectively known as “seed bugs,” and indeed it is the seeds of the host plant that make up the diet of nymphs. Besides milkweed, L. kalmii will feed on the seeds of other plants, especially composites like asters and such. I have also seen them regularly on oleander, a popular landscape plant in Arizona and elsewhere. The Small Milkweed Bug can therefore be considered a “generalist” rather than a specialist or obligate feeder on milkweed. 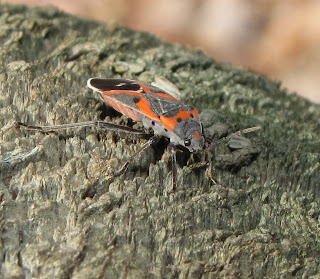 The range of this species is over virtually the entire U.S. and adjacent southern Canada, but it can be confused with other species of Lygaeus, particularly L. turcicus, the False Milkweed Bug. Note the difference in markings on the head: L. kalmii has a red basal spot or vertical bar on the head, whereas L. turcicus has a Y-shaped marking. The latter species also has few, if any, white markings on the black membrane of the front wing. 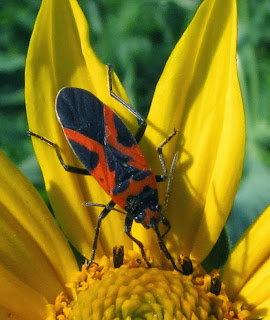 Some years tend to be better than others for the Small Milkweed Bug. Here in Colorado Springs, last summer and fall they were everywhere, even outnumbering the usually abundant Eastern Boxelder Bug. It would be interesting to find out what triggers these population booms and busts. Unusually regular, heavy summer rains might have been the reason here last year, providing an abundance of food.

I do like to think of the Small Milkweed Bug as the very definition of persistent, adaptable, hardy, and colorful. What’s not to like about a non-pest bug that can brighten up even an urban vacant lot? 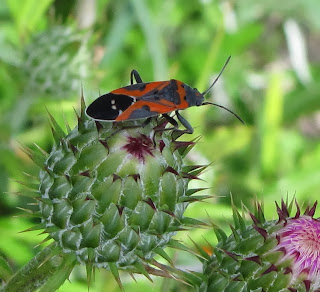