Solitary mason wasps in the family Vespidae, subfamily Eumeninae, are surprisingly diverse in appearance and habits. Most species nest in pre-existing tubular cavities, or make free-standing mud nests, but not all. Some excavate burrows in the soil. Perhaps the most accomplished digging species are members of the genus Pterocheilus. 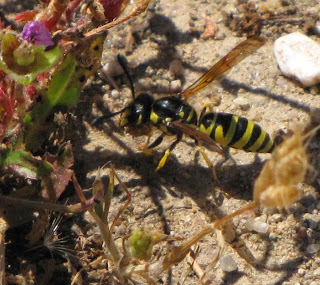 I so rarely encounter this genus, let alone a female actively digging a burrow, that when I came across one at Charmlee Wilderness Park in Malibu, California on May 19, 2011, I at first identified it as a beewolf, then another type of “sand wasp” before finally realizing it was a eumenid. The longitudinal folds in her wings when she was at rest easily betrayed her true identity.

Wasps that dig burrows are called “fossorial” by entomologists. Most of those wasps are equipped with stout spines on the front feet. This attribute is called the “tarsal rake,” and it is highly effective in moving sand and soft soil at a high rate of speed. Some wasps, rather than kicking soil will instead “pull” it out of the burrow by carrying a pile in their front legs and under their “chins,” while backing out of the tunnel.

Female Pterocheilus are equipped with a “beard” of long setae on their palps, segmented mouthparts behind the mandibles, which also have a fringe of hairs. 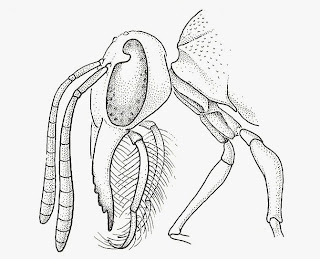 This modification of their anatomy, called a “psammophore,” allows them to carry a load of soil away from their nest location and scatter it into the landscape. This behavior effectively eliminates all trace of their activity, making it nearly impossible for parasitic insects to find the burrow once the entrance is sealed. 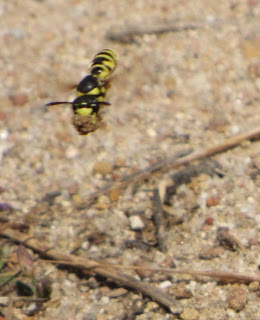 Female carrying soil in her "beard"

Pterocheilus quinquefasciatus is a fairly large wasp, females ranging from 13-16 millimeters in body length. This is the species I have found here in Colorado Springs. It occurs west of the Mississippi River to the Rocky Mountains, north to the Northwest Territories. It is also found in eastern Oregon and Washington, and southeast British Columbia. It is apparently absent from Arizona, Nevada, and California.

According to Jelle Devalez, in posts of this species to his Flickr.com photo stream, female wasps lay a single egg in the bottom of their burrow before they go hunting for caterpillars. Jelle discovered the species nesting in Badlands National Park in South Dakota. Apparently, caterpillars of the Darker Spotted Straw Moth, Heliothis phloxiphaga, are the preferred prey at that location. The female wasp paralyzes a victim, then carries it in flight to the burrow. Up to five caterpillars may be stored in one cell. 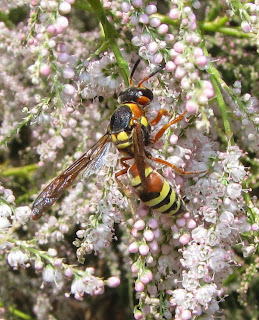 Most species of Pterocheilus are not as large, or so widely distributed geographically, so are easily overlooked. There are roughly forty species in North America, with most of the diversity in the southwest U.S. Little is known about the biology of most species. P. texanus makes a shallow, vertical burrow terminating in a single subterranean cell, as do most Pterocheilus. Anywhere from 3-9 caterpillars are stored in each burrow before it is sealed (O’Neill, 2001).

As always, I encourage my readers to document their own observations of solitary wasps through still images, digital video, and note-taking. The sky is the limit for the scientific contributions you can make. 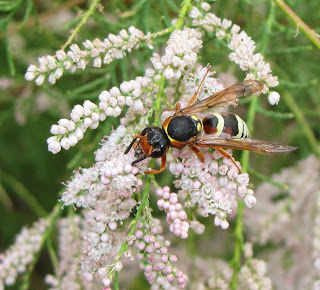