My wife and I scheduled our recent visit to see her parents in Leavenworth, Kansas specifically around the time when Brood IV of the periodical cicadas (Magicicada spp.) would be emerging, singing, and laying eggs. By all historical accounts, we should have timed it almost perfectly. Unfortunately, brutal weather turned that particular goal into an almost total bust. 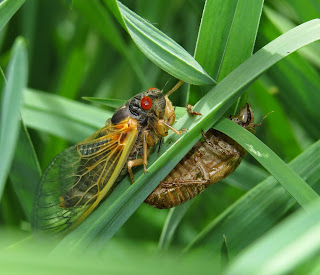 At any given locality in the eastern United States, Magicicada emergences happen only every 13 or 17 years. Scientists remain puzzled by the potential reasons for such a sporadic, synchronous spectacle in which millions of cicadas erupt from their underground lair to shed their youthful exoskeletons for winged adulthood.

Different populations of periodical cicadas, also known as 17- or 13-year "locusts," have been assigned Roman numerals denoting "broods." Each brood has an emergence on a thirteen or seventeen year cycle. The thirteen-year cicadas typically range in the south, while seventeen-year broods occur mostly in the north. There is usually more than one species represented in each brood. This is an extra-special year because both the 17-year Brood IV and the 13-year Brood XXIII are emerging. This happens once every 221 years. 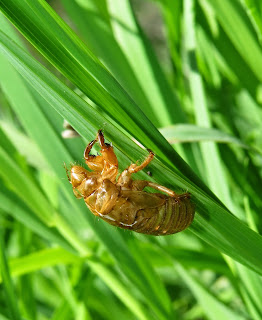 Initial observations of periodical cicadas by early settlers in 1633 were rife with errors. Those mistaken beliefs were repeated in a 1666 English publication. The only such massive appearances of a single kind of insect that the colonists were familiar with were plagues of migratory grasshoppers, so they assumed that the cicadas, too, were "locusts," hence the incorrect label that has persisted to this day.

Cicadas are actually true bugs in the order Hemiptera, suborder Auchenorrhyncha. Leafhoppers, treehoppers, and planthoppers are all related to cicadas. They all have piercing-sucking mouthparts with which they tap plant juices for food. Despite their overwhelming numbers, periodical cicadas do remarkably little damage in either the nymph or adult stage.

Damage to trees occurs when the female cicada forces her spear-like ovipositor into a twig or branch to lay her eggs. She does this with enough force that it can snap the twig, causing the foliage beyond the break to die and turn prematurely yellow or brown. This phenomenon is called "flagging." It also occurs when more than one female oviposits in the same twig. 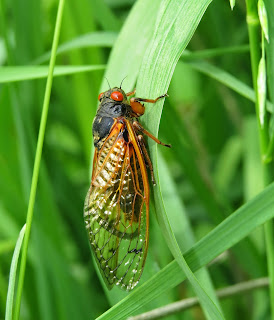 Tiny cicada nymphs hatch from these eggs and plummet to the ground where they immediately dig into the soil. There they will spend the next thirteen or seventeen years (depending on the species), feeding on the roots of trees, shrubs, and other plants. At the end of their underground life they surface, sometimes erecting "chimneys" above the surface of the soil. They clamber out, and up the nearest vertical object. Their front legs are like grappling hooks, and they secure themselves to the object. The exoskeleton then splits down the back and out comes a fledgling adult cicada. It is white, with patches of black across the thorax, and bright red eyes. The wings inflate in a matter of minutes, but it takes hours for the new exoskeleton to harden and the black and orange pigments to fully manifest. 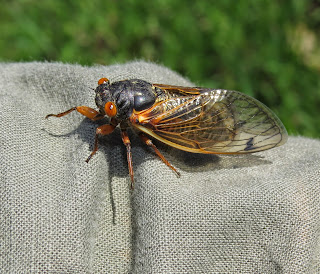 Male cicadas have a pair of percussion organs inside their abdomen, and opening on the underside of the insect. They can generate a very loud "song" in this manner and, obviously, the more cicadas the louder the concert. The adult insects live just long enough to procreate before falling victim to predators, a parasitic fungus, sheer exhaustion, or old age.

There are three species of Magicicada with a 17-year cycle, and four species with a 13-year cycle. One of these thirteen-year species, M. neotredecim, was only discovered in the year 2000. The songs of the different species differ perhaps more than the physical appearance of the insects. 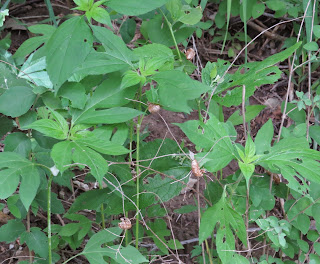 There are at least 9 shed exoskeletons in this image

When we happened upon Brood IV in northwest Missouri, the emergence had barely begun. We saw numerous shed exoskeletons, but found only four or five adult specimens, one only hours old. Meanwhile, there was evidence of rampant predation by birds. There were wing fragments everywhere. What a disappointment. Only a week later, I am receiving reports from friends that the emergence has finally overwhelmed mortality factors, and males are forming choruses. 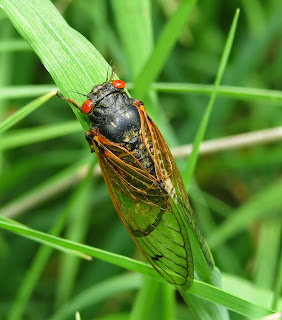 I have no idea when I will get another opportunity to document a Magicicada brood in the manner I want to for all of my readers here. Thankfully, there are plenty of other resources online, including the "Cicada Mania" website, the "Periodical Cicada Page" produced by the University of Michigan, and "Cicada Central,", a project of the University of Connecticut.