You would think that by virtue of the fact that spiders are venomous they have few enemies willing to tangle with them. Such is not the case. Some spiders have therefore evolved to look like other animals that are even more distasteful or hazardous to potential predators. Many spiders resemble ants, for example, and one common example is the Twobanded Antmimic, Castianeira cingulata. 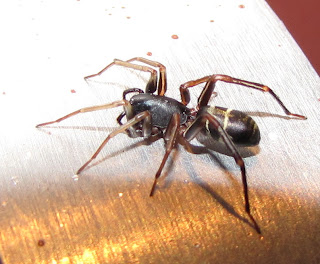 The only reason I was able to get clear images of this particular female specimen was because she had climbed to the top of a doorknob and seemed perplexed as to where to go next. She actually “danced” in place, raising her abdomen and making choreographed movements with her legs. While antmimic spiders in the family Corinnidae are adept hunters, they do not see quite as well as wolf spiders and jumping spiders. I am not sure whether she detected my presence or not, though it seems likely that she did. 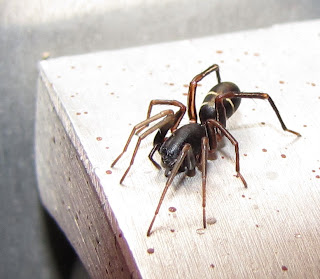 At only 7-8 mm in body length for females, and 6-7 mm for males, these are not imposing creatures. Their size does match that of carpenter ants, though, and so does their coloring and overall body shape. The two pale bands on the abdomen may serve to give the impression that there are actually three body segments instead of two. Even more astonishing is that the spiders behave like ants, even appearing in the company of ants to reinforce their disguise. They move reasonably slowly when prowling, bobbing their abdomens and even waving their front legs like a pair of antennae. 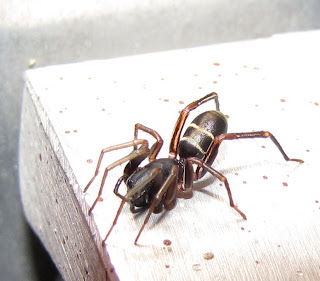 Why bother mimicking ants? Carpenter ants in particular are pugnacious creatures that can bite fiercely and also emit formic acid, a very repulsive chemical compound. Few other insects, or spiders and other predators want to take on such an aggressive dynamo, so looking and acting like an ant has its advantages. 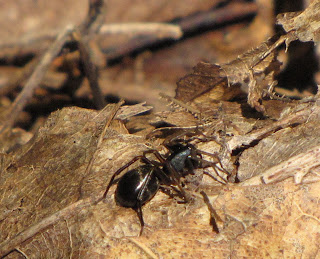 Castianeira cingulata ranges from the northeastern U.S. and adjacent southern Canada east to South Dakota and south to Arkansas and Florida. It inhabits woodland habitats, scouring the leaf litter on the forest floor for insect prey. The spiders are active both day and night. The spiders can overwinter in dense silken sacks that they spin in sheltered situations such as rock crevices and the recesses of decaying logs. It is suspected that they can potentially live several years, at least in the southern reaches of their range. 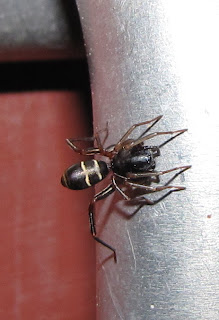