The Germans Are Back

The other day I came out of my apartment to find a piece of paper stuck in my screen door. I was dreading reading about a rent increase, but the announcement was unpleasant in a different way. “We are starting a new program here at (name of apartment complex)” began the notice. Turns out that the management is initiating an ongoing pest control schedule, no doubt due to someone complaining about German Cockroaches, Blattella germanica. 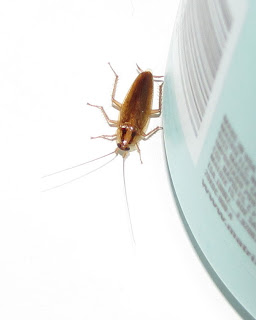 I have had German roaches in my own apartment previously. Initially I did not treat for them because a Mediterranean House Gecko, Hemidactylus turcicus, had also taken up residence in my kitchen and kept the roach population to tolerable levels. Eventually, the lizard died, and then the roach population exceeded my psychological and physical “carrying capacity.”

I reluctantly purchased some roach bait traps, and that did the trick….until a few months ago, when I saw another roach. In the last month I have killed two: a male and a female. Still, I have a hard time with the invasion of privacy that comes with an extermination service, not to mention having some trepidation over whatever chemical treatment they are applying.

Ok, enough about me, how about some background on the German Cockroach? It is believed that most of our “domiciliary” roach species are native to tropical Africa, and can only exist outside their normal geographic range by occupying buildings that offer a year-round approximation of their tropical homeland. Why are they called “German,” then? Well, here in the United States at least, we have a history of naming economic pests after nationalities that we have had conflicts with. So, given our World War II enemies, it seemed fitting to apply the “German” epithet to this particular roach species (in Germany the species is called the “Russian” Cockroach). 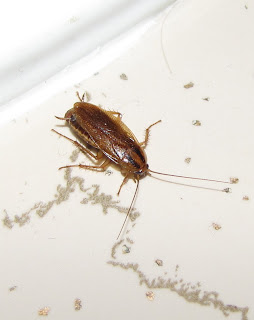 The German Cockroach is one of the smaller roach species, ranging from 11-13 millimeters in length. Consequently, it is sometimes mistaken for some other kind of insect and dismissed. There is no ignoring their numbers, however, and opening a cupboard can send dozens of them scurrying for darkness in a dwelling that is infested with them. Males are sleek, slender, amber-colored insects, while females tend to be darker and more robust. Both genders are shown in the images here. See if you can tell which is which.

As far as I am aware, domestic pest roaches have only been implicated in the mechanical transmission of bacteria, never actually proven to be carriers of Salmonella and other treacherous microbes. Roaches groom themselves constantly, lest they themselves become victims of pathogens and fungi. This is not to say that cockroaches are at worst a nuisance. Far from it. 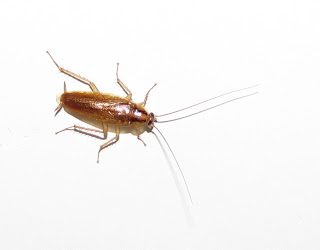 What has been conclusively demonstrated is that cockroach body parts, shed exoskeletons (remember roaches have to molt to grow), and fecal matter are a major, major trigger of asthma, especially in children. This is one reason that neglect of public housing should be a crime: improper maintenance can lead to chronic health issues that are far more costly to society (and the individual) in the long run. Also, entomologists who study roaches in the lab frequently develop allergies to roach exoskeletons, feces, and body parts. Such afflictions are sometimes severe enough to cause the scientists to abandon roaches as study subjects.

Cockroaches are successful organisms for several reasons. They achieved near perfection in the evolutionary sense millions of years ago, judging by the fossil record of roaches that are essentially identical to contemporary species. They are generalist feeders, able exploit all manner of organic matter. They are adept at detecting and avoiding poisons, being able to taste-test food before ingesting any. They reproduce at a rate that makes rabbits envious. 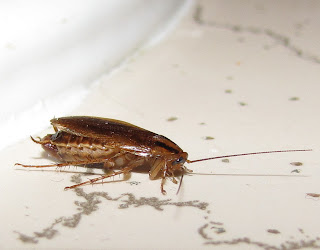 Female German Cockroaches cannot be accused of parental neglect. Once mated, a female will produce an egg capsule called an “ootheca.” Each ootheca contains an average of 30-40 eggs. The female carries the capsule at the tip of her abdomen until just before the eggs are ready to hatch. Then she carefully deposits the egg case in a crack or crevice where the cockroach nymphs can emerge in relative safety. Each female roach can produce several ootheca during her lifetime.

A typical roach population is a youthful one, comprised of about eighty percent nymphs of various stages and twenty percent adults. I haven’t seen any nymphs in my home lately, and I hope it stays that way.