I can always count on an aphid-infested tree to provide me endless hours of enjoyment. Aphids secrete a sweet, liquid waste product called “honeydew.” This substance attracts an enormous diversity of wasps, bees, flies, and other insects (even butterflies). I found just such a tree, a young aspen, at the Cheyenne Mountain Zoo in Colorado Springs, Colorado last week. Among the numerous hymenopterans seeking refreshment was a mason wasp that goes by the unfortunately long name of Ancistrocerus tuberculocephalus. 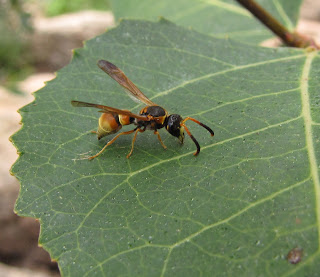 Mason wasps are solitary members of the family Vespidae, which includes familiar social species like yellowjackets and paper wasps. Nearly all members of that family fold their wings longitudinally when at rest, so that behavior is often a good way to identify them. 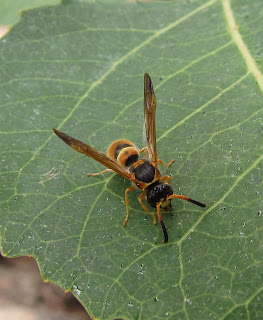 While some of the mason wasps make free-standing nests of mud, the majority nest in pre-existing cavities, partitioning the interior space into separate cells.

Ancistrocerus tuberculocephalus is known to use the abandoned mud nests of the Black and Yellow Mud Dauber, Sceliphron caementarium, for its own nests. It can also dig out the pith in sumac twigs and nest inside the resulting hollow; or it can use old beetle borings in dead wood. The female wasp provisions each cell with paralyzed caterpillars that will be the food source for the single larva that develops in each cell.

This species is divided into two subspecies. A. tuberculocephalus sutterianus ranges from British Columbia to California, Nevada, and Utah. Below is a specimen of this subspecies from near Long Beach, California. 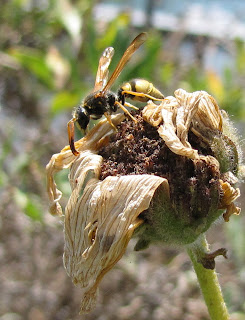 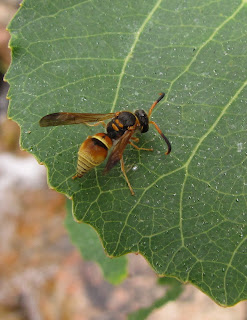 You can help provide housing for these flying pest control agents by simply leaving old mud dauber nests where they are. Should you be feeling more industrious, consider bundling old sumac twigs and hanging them under an eave; 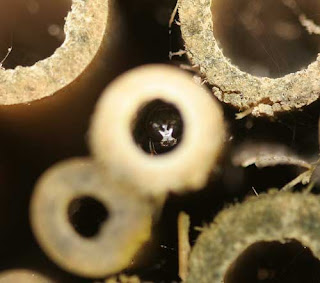 or drill six-inch holes of various diameters into a block of wood and tack it up. 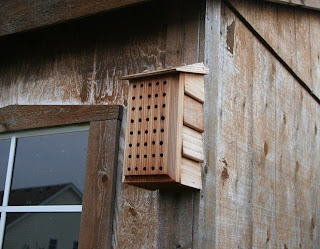 Many solitary wasps, and bees, too, need the extra real estate these days as their habitats disappear amid suburban sprawl. The wasps won’t bother you, and you might make some interesting discoveries about them.

Special thanks to David R. Green for use of his image of the twig trap nest, complete with a solitary wasp peering out of it. Thanks also to "Birds n' Such" for the image of the upscale bee block.