Unfortunately, here in the Sonoran Desert of southern Arizona, there is not a great diversity of ichneumon wasps, at least not the larger, more colorful species that one finds routinely in the deciduous forests of eastern North America. I was delighted to find a female specimen of Therion morio at the Vernon Wildlife Area near Mukwonago, Wisconsin on June 25. Even more amazing, it actually paused long enough for me to snap a few images. The one below is the best of the lot in the dim light of the forest understory. 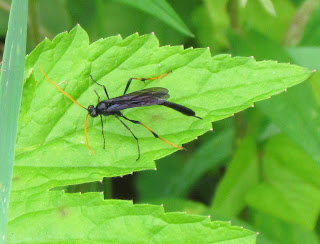 This species is about the size of a black and yellow mud dauber, and it would not be surprising to find it is indeed a mimic of Sceliphron caementarium. The rule of thumb with ichneumon wasps is that if it looks like a stinger, then it isn’t a stinger. Such is the case here. The female has a short, spine-like egg-laying organ called an ovipositor. She does not use it in self-defense, only to inject eggs into caterpillars.

The larvae of this wasp are internal parasites of moth caterpillars, including the Fall Webworm, Hyphantria cunea, so this ichneumon should be considered a beneficial biological control of such pests. Other recorded hosts include the larvae of other tiger moths (family Arctiidae): Cycnia inopinatus; the Virginia Tiger Moth, Spilosoma virginica; the Saltmarsh Caterpillar, Estigmene acrea; and the Spotted Tiger Moth, Lophocampa maculata. While the wasp’s egg is laid in a caterpillar host, the adult offspring will emerge from the moth’s pupal stage.

Therion morio, which has no common English name, is a widespread species ranging from Nova Scotia south to Florida and west to Washington, northwest Nevada, southeast Kansas, and Mexico.