The Fourth of July holiday here in the United States celebrates our successful declaration of independence from British rule. Who would have thought that a bunch of settlers could pull that off? Well, the tradition continues as other European species continue to establish themselves on American soil. One of the most successful has been Polistes dominula, known here as the European paper wasp. 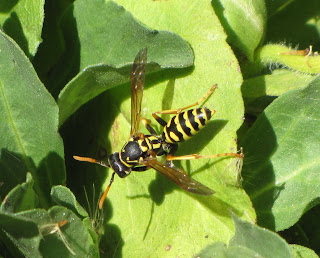 Note that this species has also been known as Polistes dominulus, but that name was a violation of Latin “gender” rules according to the International Commission on Zoological Nomenclature. No, there really is such an organization. I don’t fully understand the change, either, but I acknowledge that the Kaufman Field Guide to Insects of North America is in error. My bad, to be corrected whenever we are directed to turn out a revised edition.

The first observation of P. dominula in North America was made by G. C. Eickwort near Boston, Massachusetts in 1978. It is native to Eurasia, occurring over most of central and southern Europe, east to China and south to northern Africa and the Middle East. It therefore has a long history of living alongside people, and that affiliation is reflected in the largely urban distribution of the species here in the states. My own experience while collecting in Cincinnati was shocking. The European Paper Wasp went from an uncommon novelty in 1994 to probably the dominant species of Polistes by 1998. Now this species is known from most states and southern Canada, except for much of the Great Plains and Prairie Provinces (and apparently the Appalachian region as well). 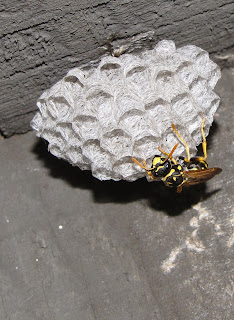 Paper wasps are social, forming relatively small colonies. They build exposed combs from woody fibers they chew into a durable papery material. While the European Paper Wasp seems to prefer to nest in cavities (making them an enemy to those who put out bird boxes and check them), the species will also nest under the eaves of buildings and even among the tangled branches of shrubs. Nests peak at only a few dozen individual wasps, usually in late autumn. 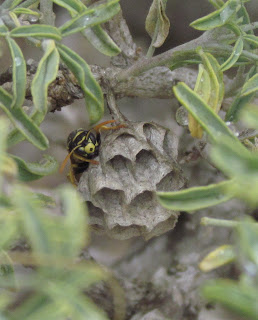 Polistes dominula is rather small for a paper wasp, with a forewing length measuring 9-13 mm. Its compact body, relatively short legs, and bold black and yellow color pattern has contributed to it being mistaken for one of the yellowjackets, a different kind of social wasp in the same family, Vespidae. The orange antennae of P. dominula help one to identify the species with ease. No other social wasp in North America has orange antennae.

Like other paper wasps, the European Paper Wasp feeds its larval offspring pulverized caterpillars. The adult “worker” wasps are very efficient hunters, and there has been worry that some of our native butterfly and moth species may suffer from this new predatory pressure. The flip-side of that concern is that garden pests like cutworms and armyworms are probably being suppressed by the added predator species. P. dominula will take other insect prey, too, which allows it to be even more successful than our caterpillar-focused native species. 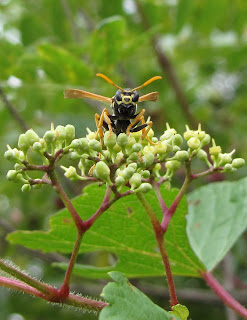 Adult wasps can be found nectaring on flowers, especially grape and other umbelliferous blossoms. The wasp above, imaged on the campus of the University of Massachusetts (Amherst) was chasing off all other insects attempting to visit the flower it was stationed at. This species can also damage ripening grapes in vineyards, and cherries in orchards (at least in western Colorado). Paper wasps are also very fond of “honeydew,” the sweet liquid waste products produced by aphids, scale insects, and related true bugs.

This wasp has been studied intently, and one headline-making investigation demonstrated that female dominance hierarchy in a given colony is predicated on the facial markings of the individual wasps. This does not necessarily correspond to overall fitness, though larger specimens tend to overwinter more successfully.

Only the female paper wasps survive the winter, tucked into insulated crevices where they achieve a state of lowered metabolism known as “torpor.” They then emerge the following spring to found or co-found new nests. Ultimately, only one female will lay eggs in the nest, even if another female cooperated in building the nest. 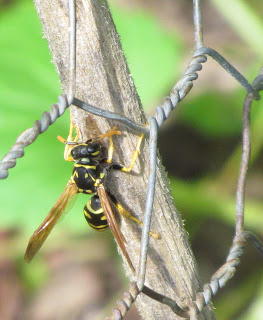 Interestingly, while most of our native paper wasp species are plagued by stylopids, the “twisted-wing insects” of the order Strepsiptera, P. dominula appears to be immune to these parasites, or nearly so. Paper wasps with what appear to be seeds wedged between abdominal segments are victims of stylopids.

There is much information about this species online, but be careful where you surf. Perhaps the most comprehensive and accurate species account is from the Identification Atlas of the Vespidae of the Northeastern Nearctic Region. A PDF article on ”Polistes dominula found in South Dakota, USA” also offers good information.