While living in Massachusetts in 2009 I had the pleasure of prowling around some very nice natural areas with Lynn Harper, an accomplished naturalist who works for the Natural Heritage and Endangered Species Program in the Massachusetts Division of Fisheries and Wildlife. Among the places I went with Lynn was Tully Lake in Royalston. There I was to encounter a very large wolf spider in a wet meadow near the lake. 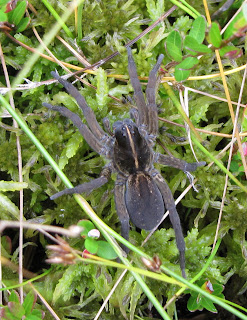 Scientists have not made it a priority to assign common (English) names to individual species of insects and spiders, unless the creature is of economic significance. Consequently, there is no specific name for this magnificent, eye-catching arachnid. It is probably the species Hogna helluo, though without a thorough physical exam of the specimen it is nearly impossible to be certain. Spiders darken with age, and there is plenty of variability in color and pattern from individual to individual anyway.

Arachnologists measure spiders by body length, not legspan, but even by that standard, Hogna are real giants. Mature males of H. helluo range from 10-12 mm, while females are a whopping 18-21 mm. Add the sprawling legs and they are an intimidating creature to those unfamiliar with their skittish nature.

Wolf spiders in general hunt “on foot” instead of building webs to snare their prey. Consequently they are more muscular than the average arachnid, with keen eyesight. They are most active at night, perhaps because their arch enemies the spider wasps (family Pompilidae) hunt during the day. Try hunting for wolf spiders yourself, at night. Shine a flashlight or a headlamp over a field, or even a lawn, and you will see the eyes of wolf spiders sparkling like diamonds as they reflect the beam of your light.

Wolf spiders can simply overpower their prey, and if you witness one attacking a cricket or other insect you will probably be shocked by the violence. Still, a wolf spider is going to flee at top speed from your approach. I was fortunate to reel off a number of pictures before this female fled among the grass and moss. 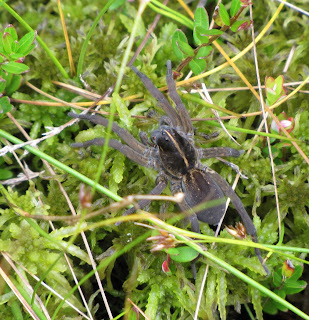 There are many stories to tell about wolf spiders, so I will give away no more secrets today. I will simply encourage you to go out and look for them yourself; and ask that you treat the odd wolf spider that enters your home with a little respect. Please relocate such spiders back outdoors where they can intercept invading insects that could do you, your family and pets real harm. Thank you.