The first time I encountered a black widow was in the desert of eastern Oregon. I cannot recall the circumstances exactly, but I was rather awed, given that I had read about them but never seen one until then. Thanks to the book How to Know the Spiders, by B. J. Kaston, I learned the species found in the Pacific Northwest is the Western Black Widow, Latrodectus hesperus. 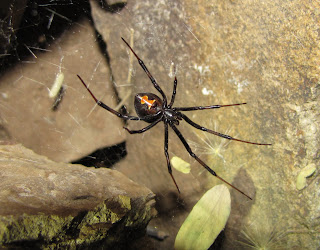 Eventually, I was able to easily identify black widow webs, even if the spider was not present. Black widow webs are large, three dimensional tangles of extremely strong threads. The whole web can easily occupy a cubic foot or more, and you can pluck the silken strands like guitar strings without them breaking. A funnel-like retreat is usually seen going into a rodent burrow, under a boulder, or some other cavity that would take heavy machinery to break into. Black widows do not want anything to do with larger animals. Only at night are you likely to see the spider out on her web. 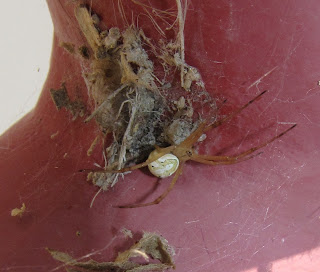 Believe it or not, black widows begin their lives as largely *white* spiders. They lose the pale spots and stripes as they age, but because males mature more quickly, in fewer molts, they never lose their pale markings entirely. Even the immature spiders sport at least some semblance of an “hourglass” marking on the underside of their abdomen, so you can still identify them as widows. Since widows sit upside down in their webs, that hourglass marking is usually visible. 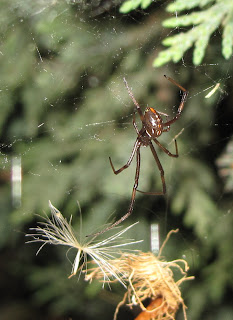 The Western Black Widow is the largest North American member of the genus Latrodectus. Females have a body length of 14-16 millimeters as adults, males 7-8 millimeters. Mature females usually lack any red markings besides the hourglass, and that may be broken or even wanting in some specimens. Some individuals may be chocolate brown instead of black. 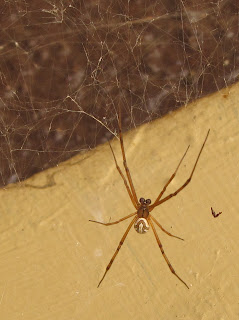 Mature males are recognized by their swollen pedipalps, which resemble tiny boxing gloves located near the spider’s face. He uses these as intromittent sex organs that fit like a key in the “lock” of the female’s paired genital openings. Contrary to popular myth, the female does not always cannibalize her mate, though sex is a risky business for nearly all male spiders.

Mated females can produce several egg sacs in their lifetime, each containing up to 750 eggs. Few of the spiderlings that emerge will make it to maturity themselves, due to cannibalization by siblings and other natural hazards. Adult females can live more than a year, though. 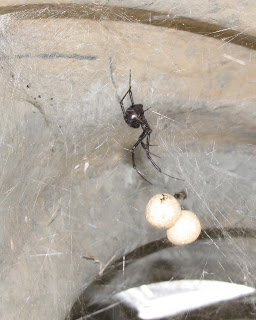 Western Black Widows are able to secure surprisingly large prey. Their webs are designed to trap prey walking over the ground. When a victim stumbles into one of the sticky trip threads attached to the ground, the thread breaks and rebounds, yanking the potential prey animal into the main body of the web. The trip threads are so elastic and strong that even small vertebrates can be captured in widow webs. I personally witnessed a hatchling lizard struggling in a web. Yes, I intervened.

While black widows have no problem killing prey as imposing as large beetles, they flee rapidly when they sense a larger creature such as a human. The speed at which they can scramble back into their retreat is astonishing. I have had many a photo opportunity cut short when I accidentally bumped a thread.

The Western Black Widow is a very common spider found from extreme southern British Columbia south to Mexico and west to Kansas, Oklahoma, and Texas. It is particularly abundant in drier habitats such as deserts and prairies, though it can be encountered in more damp situations as well.

Because of the timid nature of widows, it is relatively easy to minimize the possibility of being bitten. Simply take these precautions:

Reactions to bites from widows can vary considerably from one person to the next because immune system responses to envenomation are highly individualistic. The spider may not even deliver much, if any, venom. Still, they typical experience is excruciating. The venom is neurotoxic, meaning it affects the nervous system. This translates to triggering constant muscle contractions that result in severe cramps, especially in the abdomen, legs, and other large muscle groups. One friend of mine had back spasms for months following a black widow bite. One should always seek emergency hospitalization immediately, precisely because one cannot be sure how their body will react. Antivenin is available for treatment, though it is recommended as a last resort by most hospital physicians. Antivenin is produced from horse serum, which can carry its own complications including allergic reactions. Obviously, avoiding bites is preferable to treating them after the fact. 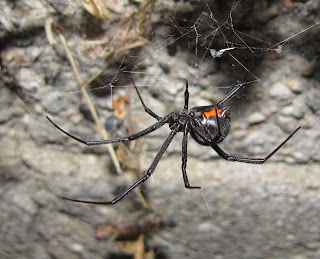 Black widows cannot be easily “controlled.” Contact insecticides have a very low probability of reaching a hidden spider, and killing one spider means it will soon be replaced by another anyway (prime web sites are a coveted commodity). Meanwhile, the spiders will kill plenty of pest insects that could potentially be more trouble than the spiders themselves. By all means, do inspect playground equipment and toys before allowing your children to play outdoors. It all comes back to vigilance and prevention. Take care, but value the work your spiders do.