I like to investigate sunflowers (Helianthus sp.) at this time of year because the plants’ extrafloral nectaries attract a variety of wasps, flies, and other insects. Not surprisingly, predatory insects stake out sunflowers, too, taking advantage of the abundance of potential prey. One of those predators that I found the other day was a Sixspotted Orbweaver, Araniella displicata. 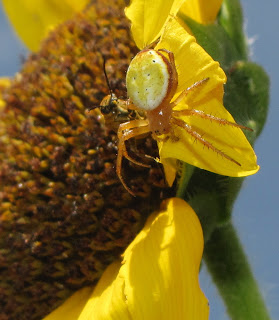 This particular specimen was the color of a sunflower, too, with a bright yellow abdomen. Other specimens, as illustrated throughout this post, may be nearly pure white, or infused with varying degrees of rust red, especially in immature specimens. The species does maintain a consistent pattern of three (sometimes four) pairs of black dots along the edges of the rear half of the abdomen.

The Sixspotted Orbweaver is one of the most widely-distributed arachnids in North America, found over virtually the entire continent, including parts of Alaska. It is not uncommon in gardens and yards, but neither is it conspicuous. Adult females measure only 4-8 millimeters in body length, males 4-6 millimeters. 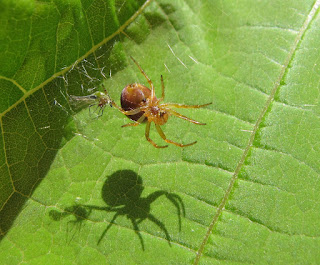 Most orb weavers spin fairly large webs in proportion to their own body size, but not so with Araniella displicata. The web of an adult spider may be only three or four inches in diameter. The spiral snare is usually built well off the ground (four to six feet), and often oriented in the horizontal plane, frequently spanning the edges of a single large leaf. The spider sits in the center (hub), hanging beneath a horizontal web (as in the image above), or head-down in a vertical one. Webs spun across the edges of a leaf may intercept and entangle longlegged flies (family Dolichopodidae), and other insects that habitually skitter over the surface of a leaf and then take flight to another piece of foliage. 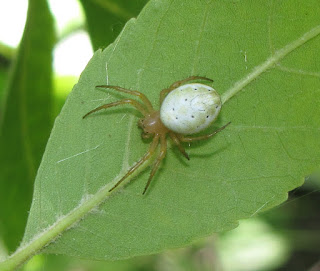 Sixspotted Orbweavers overwinter as subadult spiders, reaching adulthood in late May or early June (probably earlier in the more southerly climates). Mating takes place at about that time, and female spiders make egg sacs shortly thereafter. The egg sac contains an average of 80 eggs and is covered in loose, fluffy, yellowish silk. The package may be deposited in a curled leaf that also serves as the mother’s retreat on the perimeter of the web.

Interestingly, while this species tends to frequent woodland habitats in North America, it is found mostly in heath and heather fields in Britain, where it also occurs. The species ranges over much of northern Europe but is considered rather uncommon or even rare. 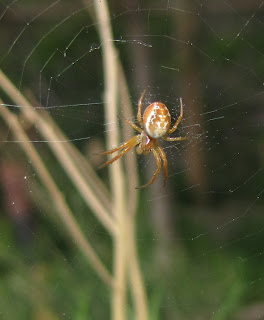 The next time you find a “baby” orb weaver, be sure and check to see if it might not actually be an adult of Araniella displicata. Mature ones can be found from late spring to nearly the end of summer. After that, you will find juveniles.