Back on July 9, 2012, I visited the Florissant Fossil Beds National Monument in Teller County, Colorado. The area is well-known for amazing specimens of fossil insects, but the ones that live there now are pretty interesting, too. Take, for example, the mason wasp Euodynerus annulatus. 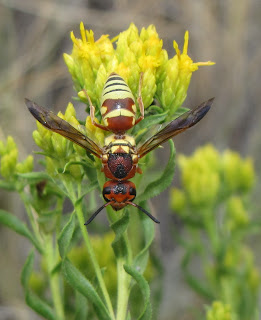 This species is widespread, found from coast to coast in the United States, south to Mexico; and in the Canadian provinces of British Columbia, Alberta, Saskatchewan, and Ontario (though the last record for Ontario was in 1954; and the record for Saskatchewan is very recent). There are five subspecies, three of them western in their distribution. The color and markings vary considerably among those different subspecies.

These are also fairly sizeable wasps, the length of the front wing varying from 8.5-10.5 millimeters. The species could be confused with the very common Euodynerus hidalgo, but the propodeum (hindmost segment of the thorax) is not as angulate in E. annulatus. The hind margins of the first and second dorsal abdominal segments (tergites) are also not clear and reflexed (turned up) as they are in E. hidalgo. 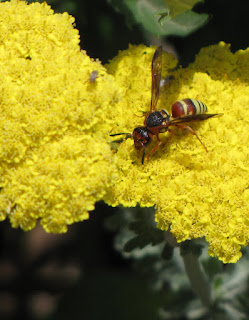 What surprised me the most about this wasp was learning that instead of using pre-existing cavities, or making mud nests, females of Euodynerus annulatus excavate burrows. Not only that, but they extend the tunnel aboveground as a curved mud “chimney.” Several individual cells branch from the main burrow underground. This wasp does not seem to be particular about the soil type, finding hard soil or soft soil perfectly suitable for its nest. The species does seem to favor situations close to water, as the female will regurgitate water to soften the soil during nest-building.

The chimney might help make the nest easier to defend from potential parasites, but it apparently serves as the source of mud pellets to make the final nest closure as well. Eventually, the turret is deconstructed entirely and the nest entrance made nearly invisible and flush with the surrounding soil (Rau and Rau, 1918). 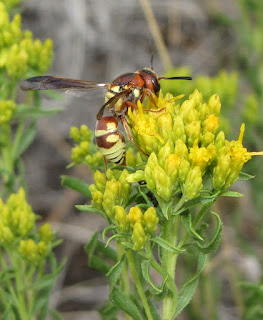 The female wasps use caterpillars from the moth families Crambidae, Pyralidae, and Noctuidae as food for their larval offspring. The caterpillars are only weakly paralyzed (Rau and Rau describe some instances in which the larvae were still ambulatory), usually several placed in each cell. A single egg is suspended from a short thread attached to the wall of the cell before it is stocked with caterpillars. When all cells are provisioned, the nest entrance is sealed and the wasp leaves to begin a new nest.

Caterpillars of the genus Loxostege were recorded as a major host by Rau and Rau, and certainly the Alfalfa Webworm and its relations are exceedingly abundant here along the Front Range. Here’s what the adult moth looks like: 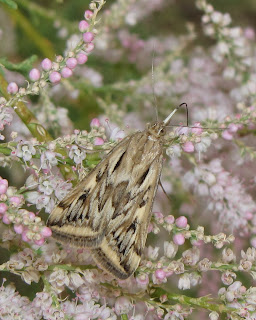 Male specimens of Euodynerus annulatus can be recognized by the hooked tips of the antennae, and their less robust appearance. I found both a male and female taking nectar from an early-blooming rabbitbrush plant (Ericameria sp.) at Florissant Fossil Beds. 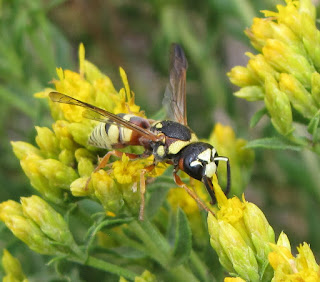 Ironically, while no nest parasites are recorded for this mason wasp, the adult wasps are vulnerable to a type of insect called a “twisted-wing parasite,” Pseudoxenos hookeri. Parasitized wasps will have bulges in the abdomen, with what look like bullets wedged between abdominal segments. More on these bizarre animals in a future post.

I must thank Dr. Matthias Buck, Associate Curator of Invertebrate Zoology at the Royal Alberta Museum in Edmonton for identifying the wasps in these images, and describing a bit of their biology. I am hoping to get him down to Colorado at some point to see for himself the amazing diversity of Eumeninae to be found here. 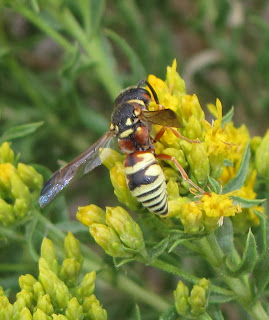