It is often difficult to tell whether a particular spider specimen is an adult or an immature, especially if you go by size alone and don’t know how large an adult is supposed to be. Take the jumping spider genus Sassacus for example. The adult animal is only about 3-5 millimeters (male) or 4.4-5.5 millimeters (female). The specimen pictured here is an adult female, probably gravid, that I spotted on the leaf of a sunflower plant here in Colorado Springs on July 28 of this year.

The origin of the genus name is an interesting slice of history. According to Bugguide.net, “Sassacus” was the last chief of the Pequot Indians, a Native American tribe of the Connecticut Valley that was vanquished in a war with English settlers in 1637. 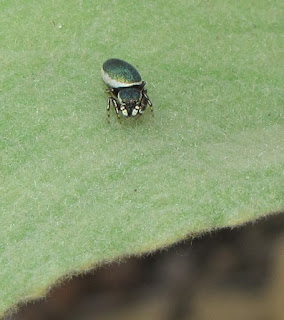 The iridescent color and very compact appearance of these spiders leads scientists to suspect that they are mimics of certain leaf beetles in the family Chrysomelidae. Many chrysomelids just don’t taste good, or they feed on poisonous plants and sequester those herbal toxins for their own defense. They advertise their distastefulness to predators with bold black and white, yellow, orange, or red color patterns, or with bright metallic colors.

Depending on which authority you consult, there are either three or nine species of Sassacus in North America, including Mexico. Richman (2008) revised the genus to include the former genus Agassa, and one species group from the genus Metaphidippus. Collectively, the genus occurs from southern British Columbia south into Central America. It is widespread in the U.S. Sassacus papenhoei and Sassacus vitis have both been collected here in Colorado.

One of the defining characteristics of this genus is the very short legs. The fourth pair of legs is the longest, followed by the third pair. The first pair of legs is still the thickest, with one or two pairs of spines, used in tackling prey. I believe the female in these images is missing one of her front legs, but if so she disguises her injury well.

Like most jumping spiders, Sassacus engages in visual courtship displays. It turns out that twitching the abdomen also produces an auditory stimulus, which scientists have recorded in the laboratory (Maddison and Stratton, 1988). Males make zigzag or spiral approaches to the female at first, raising and crossing their front pair of legs once they have a female’s attention. Later, they raise and lower their front legs until they are accepted or rebuffed (Richman, 1982). 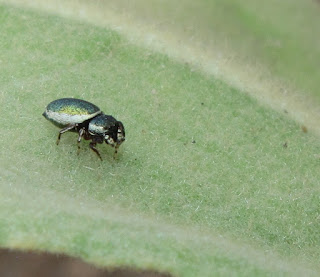 There are some “normal” species in the genus that are more spider-like than beetle-like, but the ones you are likely to encounter are going to be the beetle mimics covered in those iridescent scales. Look for Sassacus on broadleaved plants in open fields and along forest edges, but don’t expect them to be common. I was surprised how few “popular” spider references included the genus.