Expert entomologists caution that species-level identifications cannot always be made from images of live specimens in the wild. Such is the case with most spider wasps of the family Pompilidae. It is difficult enough to get any image, unless the wasp is enjoying flower nectar and oblivious to anything else, or digging a burrow and intent on her activities. So, I preface this article by stating that I can’t be certain the species depicted here is Ageniella accepta or A. conflicta. 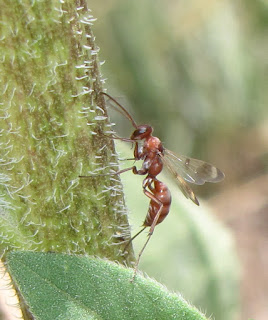 When I first spotted one of these wasps running around on a sunflower plant here in Colorado Springs, I passed it off as just another kind of ant. Indeed, ants rule the sunflowers, driving off any insects that want to lick the sweet, sticky substance exuded by the plant. Closer inspection revealed that this was no ant. The extra-long legs were one clue. So was the fact that it was winged, but the dark bands across the wings give the impression of the “nodes” that link an ant’s abdomen to its thorax. 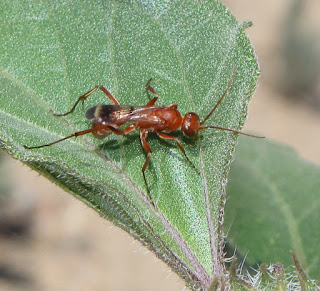 From previous experience, I know that small orange and brown pompilids with banded wings are likely going to be females in the genus Ageniella. I encountered the one below at the Orange Municipal Airport in Massachusetts on September 7, 2009. She was toting a spider, its legs amputated to presumably facilitate easier transport. Nick Fensler, an expert on spider wasps of eastern North America, kindly identified it for me as probably Ageniella conflicta. 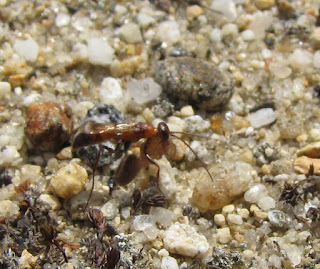 Females of that species apparently hunt immature wolf spiders (family Lycosidae) as food for their larval offspring. Varacosa gosiuta, V. avara, Arctosa littoralis, and Pardosa valens are among the recorded hosts for Ageniella conflicta. Jumping spiders have also been recorded as prey, but that was before even the experts could tell conflicta from accepta.

The amputation of the legs also makes it easier for the female wasp to stuff her victims into narrow openings. The wasps dig short burrows that originate in pre-existing crevices in the soil. Little else is known of their nesting habits and life cycles.

It should be noted that males of both species look completely different from females: They are black with some reddish markings on the legs, and a white spot on the tip of the abdomen, as shown below. Neither gender is very large. The forewing length for females is 5-8 millimeters, and 4-5 millimeters for males. 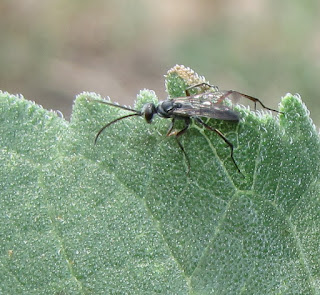 Ageniella accepta ranges across most of the southern half of the United States and into Mexico. This is one of at least three North American species in the “accepta species group.” The widespread A. conflicta and the western A. blaisdelli are the others, according to Townes (1957).

The scarcity of information about our species of Ageniella means that your own observations could be quite meaningful. Next time you think you see an ant, double check and see if it isn’t actually one of these unique spider wasps. 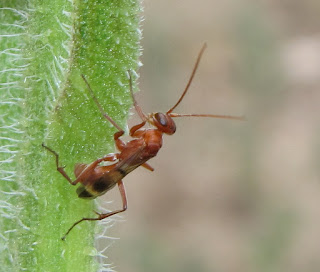