I am certainly finding the Front Range region to be exceptionally diverse when it comes to wasps, but nothing could have prepared me for what I found in the field yesterday, August 7. I was looking over a White Sweet Clover (isn’t there a song about that?), when a very large wasp commanded my attention. I immediately recognized it as a paper wasp, but not a species I would have expected in Colorado Springs. 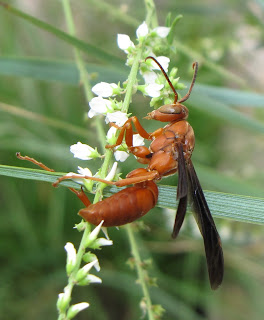 This is a male specimen of Polistes carolina or Polistes perplexus. Either way, it is most likely going to turn out to be a county record, potentially a state record, and perhaps even a range extension. Both species are recorded for Kansas, so what is a couple hundred more miles or so?

I also managed to collect the specimen, so I’ll be able to eventually examine it under a microscope for the details necessary to separate the two species. Until very recently, it was thought that the males could not be distinguished at all, but apparently there are transverse (horizontal) ridges on the propodeum (hindmost segment of the thorax) that are weak in P. carolina and much more evident in P. perplexus. Watch this space for the final determination of the species. 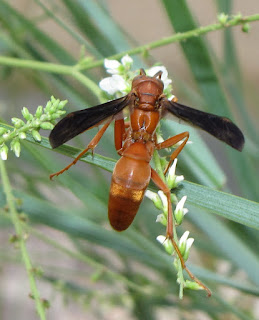 For now, I’m ecstatic over this discovery. I’d sure like to find the nest this fellow came from. Females are a little easier to identify, and finding the nest would verify that this is a species breeding here. Even so, this male is in immaculate condition, suggesting it did not travel a long distance.

Because these two species were once thought to be a single species (P. carolina), most documentation of their biology is somewhat suspect. Polistes carolina apparently nests in exposed situations, such as under the eaves of buildings, for example; and reports of that species nesting in hollow trees and other protected locations actually apply to Polistes perplexus. Prey is probably similar in both species, consisting mostly of caterpillars chewed up by the adult wasps and fed to the larvae in the nest. Still, wasps this large can probably tackle much larger prey, and a single record of an attack on a cicada (Tibicen auletes) could be for either species of wasp. 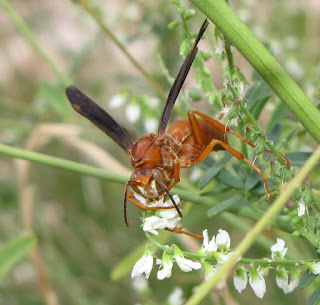 I find that in current literature the size of these wasps is measured by the length of the forewing, which is 15-20.5 millimeters in P. carolina, and 17-21.5 millimeters in P. perplexus. Contrast this with the measurements of the abundant and widespread Northern Paper Wasp, Polistes fuscatus. Forewing length for that species averages between about 13 and 17 millimeters.

Polistes carolina is most common in the southern U.S., but ranges from New York, Pennsylvania, and Ohio south to Florida and west to Illinois, Kansas, Arkansas, and eastern Texas. There is one record for Ontario, Canada, but the species is not established there. That could be the case here in Colorado, too: a fluke. P. perplexus ranges from Maryland to Georgia, and west to southern Illinois, Kansas, Oklahoma, and Texas. One recent record has come from Pennsylvania. 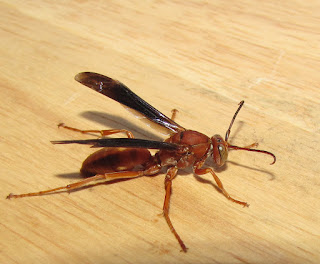 Keep your own eyes open for species that seem “misplaced.” Interstate (and international) commerce, climate change, and other factors are changing the distribution patterns and abundance of many species. We also haven’t looked that closely at insect species with little or no economic impact. You stand a good chance of adding to our collective knowledge with relatively minimal effort.