I am finding a great diversity of wasps (and other insects) visiting the leaves and stems of sunflowers (Helianthus spp.) this summer here in Colorado Springs. Among them is an ichneumon wasp in the genus Mesostenus. Boldly marked in black, white, and red, they are difficult to miss despite their small size (about 6-13 millimeters in the specimens illustrated here). 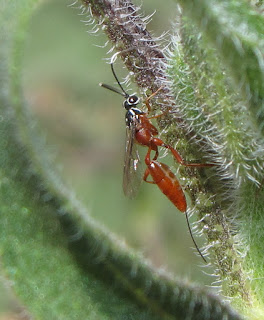 Sunflowers have special structures called “extrafloral nectaries” that secrete a sweet liquid that insects crave, especially ants. The ants try and drive off every other competing insect, which is mostly wasps, bees, and flies. Some plants are more attractive than others, and the reasons for that are probably many. We have had a sustained drought here on the Front Range, verging on the “extreme” side of the scale. Record-breaking hot temperatures have also withered many annual plants. It is metabolically expensive for sunflowers to produce the nectar, so some individual specimens probably forgo the production process. This leaves them at least slightly more vulnerable to herbivorous insects that the ants would normally fend off along with the flies and wasps. 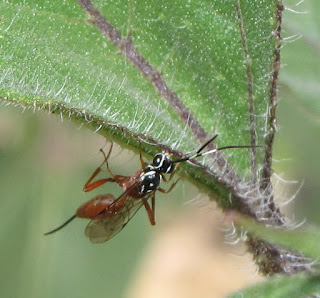 Because the wasps are constantly dodging the ants, it is difficult to get good images of them. They are persistent, however, and may eventually settle down long enough for me to get a clear shot while they lap up the sunflower’s exudates. At least it is easy to tell the difference between the females and males. Mesostenus is one of the many genera in the Ichneumonidae where the female possesses a long, tail-like egg-laying organ called an ovipositor. Males (below) lack an ovipositor, obviously. 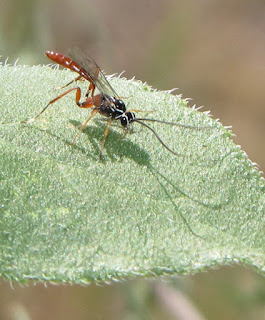 Many people mistake the ovipositor for a stinger, and react with alarm to a wasp that looks like it could penetrate a down jacket with its venomous weapon. The device is instead employed to lay eggs in the host insects the wasps parasitize.

There are ten species of Mesostenus in North America north of Mexico, but the genus is nearly worldwide in overall distribution. About four of those species can be found in Colorado. M. sicarius is closely tied to certain cacti (Opuntia spp.), of which we have prickly-pear here in the Springs.

The long ovipositors come in handy when inserting an egg in a stem-boring or shoot-boring caterpillar like that in the genus Acrobasis, in the moth family Pyralidae. The wasps are also important parasites of stored product pests like the Indianmeal Moth, Plodia interpunctella, also in the Pyralidae. The American Plum Borer, Euzophera semifuneralis, has caterpillars that feeds beneath the bark of host trees, a habit that still leaves them vulnerable to Mesostenus gracilis, the species that might be shown here. Not surprisingly, the caterpillar of the Sunflower Moth, Homoeosoma electella, is also a host. Mesostenus also parasitizes caterpillars of the moth families Crambidae and Tortricidae. 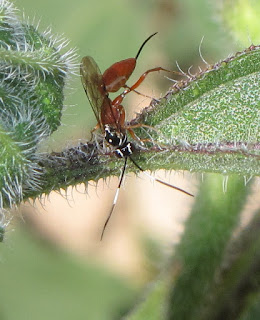 We only know host associations for a few of these wasps, so rearing caterpillars may yield new host records. That is true for other Ichneumonidae as well. Folks who try raising caterpillars through to moths or butterflies are often profoundly disappointed when a wasp (or fly) emerges from the larva or chrysalis instead. I urge people to take care to preserve the insect anyway, noting the species (or genus or family) of caterpillar from whence it came. It could turn out to be a valuable observation.