No sooner has the grass sprung up in the early spring than there are insects out to eat it. Walk through an open field or meadow and you may be surprised to find that you are startling grasshoppers into flight already. At least they will be hopping. Several species of grasshoppers (family Acrididae) overwinter as older nymphs and mature quickly once temperatures warm consistently and the days lengthen. One of those early season species is Chortophaga viridifasciata, the Northern Green-striped Grasshopper. 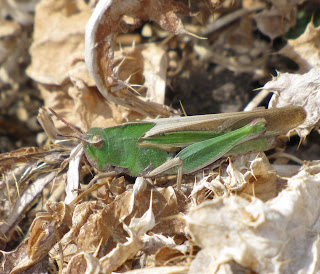 Last year in Colorado Springs I found nymphs of this species along an urban trail on March 10; and adults in an open field on March 27. This year, which has seen a rollercoaster of temperature extremes, I suspect they will mature later. 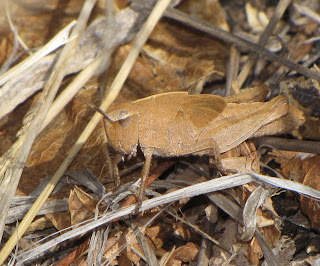 Chortophaga viridifasciata is rather variable in color and pattern, which makes it difficult for the average person to identify. Its early appearance is one clue. A distinguishing physical feature is the pronotal ridge, which is strong, straight, and broken by only a single sulcus midway along its length. The pronotum is the top surface of the thorax, and the ridge runs right down the middle, lengthwise. In profile, the ridge is evenly straight. It is at least somewhat arched in early season Arphia species.

Females of the Northern Green-striped Grasshopper are larger (28-38 millimeters) and heavier-bodied than males, and are usually green with brown markings. Males (23-30 millimeters) are mostly brown with few if any green markings. Below is an image that shows males from the same population can still be brown or green. 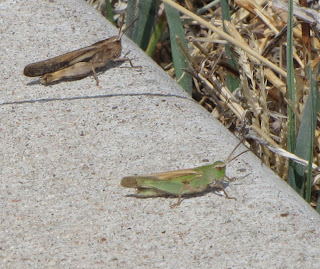 When the grasshopper flies, the hind wings are exposed. They are pale yellow in color at their base, with the outer half smoky brown to nearly black. This also contrasts with similar Arphia species that have the hind wings bright yellow, orange, pink, or red. Flight covers a short distance, but may be noisy. Male band-winged grasshoppers in general (subfamily Oedipodinae) are capable of making “crepitation flights” whereby the front and hind wings snap together rapidly to make a crackling noise. This is accomplished at the grasshopper’s will, so other flights can be silent. Crepitation flights are often associated with courtship displays, but not always, and females of some species can crepitate as well. 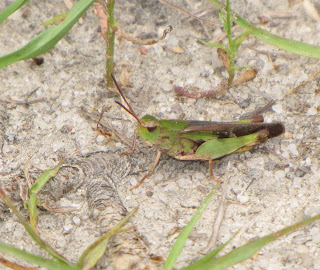 C. viridifasciata is an abundant grasshopper found east of the Rocky Mountains from southern Canada to northern Central America. It also creeps into Arizona and Idaho, with scattered records in extreme southeast British Columbia. The preferred habitat is wet areas with short grass. While there is only one generation in most of its range, there can be two generations in southern areas, where the adults can overwinter.

Southern populations have been considered a separate species, C. australior, but there is reason to suspect this is an artificial distinction. The “two” certainly overlap as far north as the Ohio River Valley and Nebraska. Where there are two generations of C. viridifasciata, the later generation tends to resemble C. australior. Many authorities still separate the two, with C. australior confined in its range to the southeast from Georgia to Florida and west to east Texas.

The only other species in this genus are C. Mendocino, found in Mendocino County, California; and C. cubensis found in Cuba. 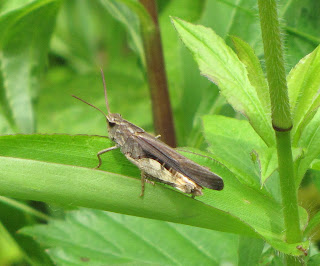 Be on the lookout for this grasshopper where you live. Even in New England they are likely to be out by the end of May at the latest, and March or April in most other locations.