The longjawed orb weavers in the family Tetragnathidae are among the most abundant of summertime spiders. Today I’ll focus on the genus Tetragnatha. There are fifteen species collectively distributed across the entire North American continent, and I’ll bet you can find at least one near you. 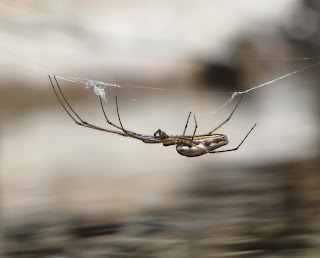 The tetragnathids get their common name from the fact that many species have extraordinarily long chelicerae (jaws) and fangs. Their entire bodies, and legs, are long for that matter. Their narrow shape and resting posture helps to camouflage them, even if they are sitting in the middle of their webs. 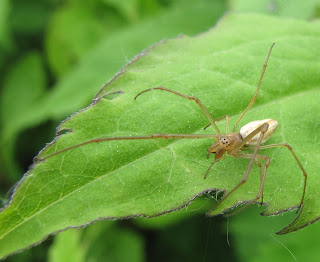 Longjawed orb weavers construct orb webs in a horizontal plane, or close to it. This helps differentiate them from the majority of orb weavers in the family Araneidae that create webs on a vertical axis. I find that longjawed orb weavers seem to fit in one of two categories: small species that live in meadows and fields; and larger species that make their webs over water. There is naturally some overlap, but meadows and riparian corridors are where you are most likely to encounter them.

They are tolerant of each other’s company, too, often building individual webs in close proximity to others of their kind. This behavior reaches its zenith in Tetragnatha guatemalensis. 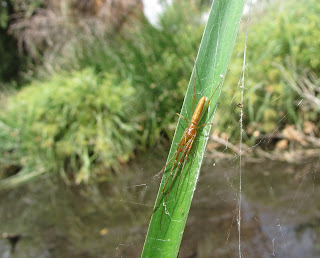 That species is essentially social, and capable of spinning communal webs that can stretch for acres. Remember that enormous web in Lake Tawakoni State Park in Texas, back in 2007? That was the work of thousands of T. guatemalensis spiders. I found a similar situation, on a smaller scale, at Sweetwater Wetlands in Tucson, Arizona in late October of 2010 (see below). It is difficult to communicate the vast expanse of silk, but it certainly exceeded what tent caterpillars can do. 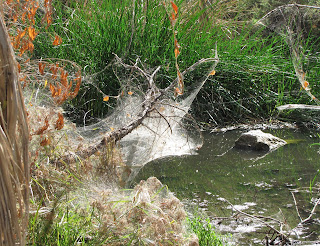 Those species that live in meadows usually occupy the hub of their webs, but their long bodies, complemented by long legs held close to together, disguise them as broken bits of grass stems. Many are straw-colored and they blend in quite well. When disturbed, they dash out of their webs to hug a grass stalk, merging almost imperceptibly with the plant.

Water-loving species usually sit on the perimeter of their webs, again hugging the substrate, often a twig or piece of emergent vegetation that anchors one corner of their web. The orbs usually have the spiral widely spaced. Still, the snare is very effective in trapping adults of aquatic insects like midges, gnats, and mayflies that emerge directly from the water into the air. The horizontal web intercepts them on the way up.

Mature tetragnathids, depending on the species, can measure from 5-16 mm or so in body length. The spindly legs make them seem even larger. Males are usually the (slightly) smaller gender. During mating, both sexes grasp each other’s jaws. Males may have spurs on the chelicerae to receive the female’s fangs, presumably to avoid fatal results from the whole affair.

Females lay their eggs in egg sacs, and those silken packages can vary in appearance by species. Some are adhered closely to a twig or other object, blending in with the substrate. Others, like the one above that I found in south Texas, are suspended on the periphery of the web. Once the web itself is long gone, the remaining egg sac can be a puzzling object for the naturalist to make sense of. 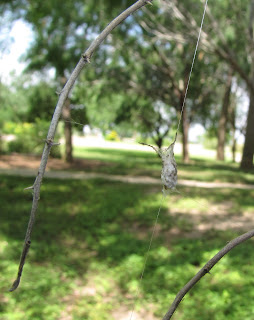 Identifying longjawed orb weavers to species is an inexact science based in large part on the genitalia; and also on the relative spacing of the eyes, and the length of the jaws relative to the length of the carapace (top of the cephalothorax). It is enough to simply appreciate their diversity in my own opinion. One species that is easy to recognize is the emerald green Tetragnatha viridis, found in the eastern U.S. and adjacent southern Canada. There is no mistaking it for any other. 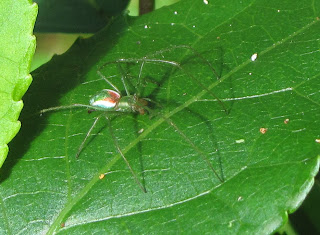 See if you can spot some of these unique spiders near your home, or the next time you go down by the river or lake. You might also want to thank them for helping diminish the populations of midges, mosquitoes, and other insects that annoy you at this time of year.