Cellar spiders are named for their habit of building their webs in cool, dark places such as basements, old mine shafts, wells and the like. Indeed, many members of the family Pholcidae do frequent such situations. However, this is not true of the Marbled Cellar Spider, Holocnemus pluchei. 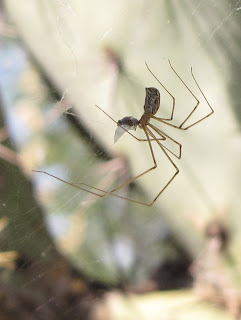 The Marbled Cellar spider is actually native to the Mediterranean region of Europe. The earliest known record in North America comes from Sutter County, California in 1974. Because this species closely resembles the common Long-bodied Cellar Spider, Pholcus phalangioides, it is possible that it became established prior to 1974. The current U.S. distribution of the Marbled Cellar Spider ranges east to at least central Texas, and north to southern Oregon. 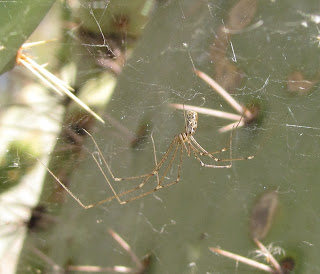 I find this species to be far more common outdoors than I do indoors here in southern Arizona. The webs of Holocnemus are irregular but decidedly dome-like, at least when one individual spider is off by itself. This is rarely the case, though, and many specimens will together form nearly contiguous webs that stretch far and wide. Dr. Elizabeth Jakob of the University of Massachusetts (Amherst) has found that up to fifteen individual spiders may share a communal web at any one time, with “membership” changing periodically. The spiders do compete over prey items, but skirmishes are rarely protracted. 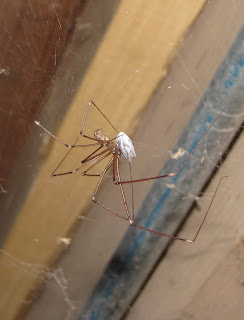 Nearly any building overhang or dense tangle of vegetation will do for a web location. The primary criterion seems to be that the spiders do need shade from the unrelenting sun. At the Tucson Botanical Gardens I find a favorite place for this species to build its webs is among the leathery, spine-studded leaves of agave plants. Not many enemies of these spiders want to pursue them among the botanical equivalent of barbed wire. 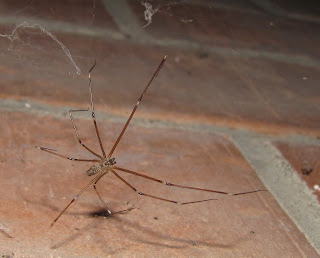 The body length of mature female Holocnemus pluchei spiders is only 6-8 millimeters (males 5-7 mm, see image above), but their long, sprawling legs make them appear much larger. While this species is not regarded as dangerously venomous to people or pets in terms of the virulence of its venom, it has recently been discovered to have allergenic properties. According to this article, the species produces arginine kinase, a newly-described asthma-inducing allergen. 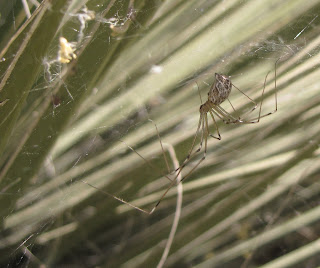 You want even more information and images? Some fantastic close-ups of this species can be found at the EuroSpiders and Spider Pharm websites. Austin Bug has a great article discussing common pholcid spiders of the Austin, Texas area, including the Marbled Cellar Spider. There is a PDF file available of the article ”Contests Over Prey by Group-Living Pholcids (Holocnemus pluchei)” in the Journal of Arachnology. Another PDF article discusses ”Food Level and Life History Characteristics in a Pholcid Spider (Holocnemus pluchei)” in the journal Psyche.