What could be more relaxing on a Sunday afternoon than lounging in a gently-swaying hammock in the backyard? Well, don’t ask any of the hammock spiders in the genus Pityohyphantes. Their “hammock” is not for relaxing but for capturing insect prey. 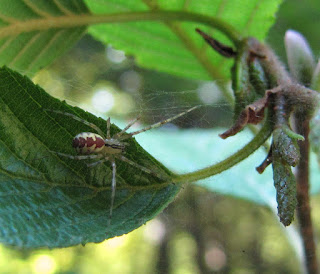 Hammock spiders are in the sheetweb weaver family Linyphiidae, and their webs are more often slightly convex rather than concave. The silken platform is suspended by a maze of threads above it, it just doesn’t sag very often. There are sixteen species in North America, mostly occurring in the coniferous forests of the west and north. Shown here are two specimens from western Massachusetts, and one from the Front Range in Colorado. The very name Pityohyphantes is Greek for “pine weaver.” Look for their webs in hardwoods, too, usually in foliage and well off the ground.

I was surprised to find the Colorado specimen shown below hanging in the middle of its web, upside down beneath the sheet. Usually, these spiders conceal themselves on the underside of foliage on the periphery of the snare. They may also construct their webs on fences or the exterior of buildings and other manmade structures. 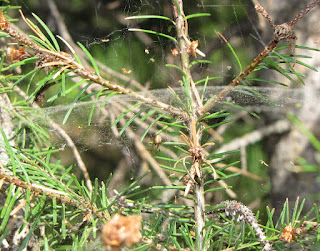 The spiders themselves are not particularly large. Mature females are around 5-7 millimeters in body length, the males slightly smaller. Mating takes place in the spring, at least in the species Pityohyphantes costatus. The female attaches her egg sac to a twig or other object on the edge of the web. Apparently both adults and immature specimens may pass the winter under bark, or stones on the ground.

Hammock spiders are fairly easily recognized by the consistent pattern on the abdomen, a brown or reddish jagged-edged band down the middle of the back, on an ivory background. Reliable identification of the species can only be accomplished by examining the external genitalia. 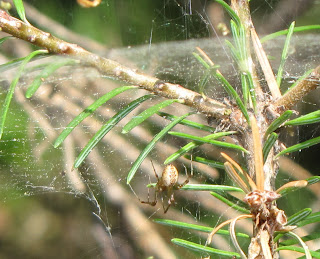 How do you tell hammock spiders (or any sheetweb weaver for that matter) from cobweb weavers? One clue is the legs. Cobweb weavers have legs free of spines, whereas sheetweb weavers generally have prominent setae on the legs. Obviously, the webs can be a clue as well, though some cobweb weavers like Steatoda do spin a sheet-like web with a maze of tangled lines above and below their webs.

I have not found hammock spiders to be nearly as abundant as other sheetweb weavers like the Bowl and Doily Spider or various dome spiders, but I haven’t been looking intensely for them, either. See if you can find them around your own neighborhood or local park. Of course, you’ll have to get out of your own hammock to do that…. 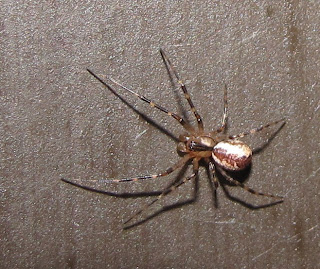