You never know what you are in for when you agree to help with a “bug event” at your local park, nature center, museum, or zoo. This past Wednesday, July 11, I agreed to help out at the “sweep net station” during the “Big Day for Bugs” event at the Fountain Creek Nature Center in Fountain, Colorado. It was fun helping kids and their parents and guardians discover insects and spiders, and in the process I was surprised by one find in particular. 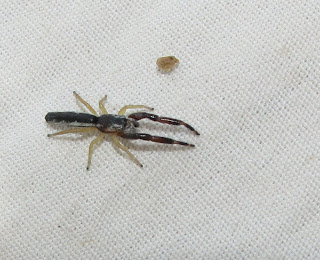 A part-time naturalist at the nature center decided to try his own hand at sweeping, and went out into a field adjacent to our table under the “grandfather cottonwood” tree. He deliberately swept through a patch of horsetails (Equisetum sp.) that rose amid the dry grasses and herbs. Fountain Creek Regional Park includes a natural riparian habitat and several artificial ponds, but the horsetails were not terribly close to water. Anyway, when he dumped his catch, one spider stood out immediately.

Among the usual crab spiders (Thomisidae family), long-jawed orb weavers (Tetragnathidae), and other jumping spiders (Salticidae), were several specimens of the bizarre Pike Slender Jumper, Marpissa pikei. “Slender” is being generous. They put Twiggy to shame and look to be on the verge of anorexia. I managed to fire off a few images of two of the more impressive male specimens before they found their way off the table and back into the field.

Marpissa pikei ranges from the eastern U.S. and southeast Canada west to Nebraska and Arizona. I guess you can add Colorado to the map, too. These are not large spiders. Mature females measure 6.5-9.5 millimeters in body length, and males 6-8.2. The first pair of legs, however, are easily as long as the entire body, so the animal looks twice as big. Those heavy front legs are not the ones used to launch the arachnid in its jumps, but are used mostly to grab prey. They are not even used in walking, the spider using its other six legs for mobility. 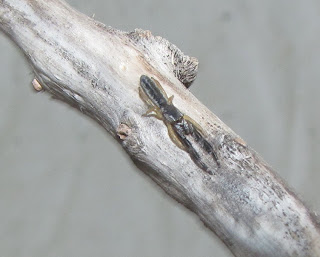 The shape, pattern, and posture of the Pike Slender Jumper camouflages it very well as it waits in ambush in tall grass for a potential insect meal to come within striking distance. They are very alert and agile, as demonstrated in this video by Richard Walton.

Males make good use of those long legs in courtship displays, raising those limbs vertically, and elevating the abdomen to get a female’s attention.

Mature individuals of Marpissa pikei can be found from spring through fall, and even in the winter in Florida. The species is perhaps more abundant in arid habitats like beach grasses, dunes, and prairies than in other grassland communities. 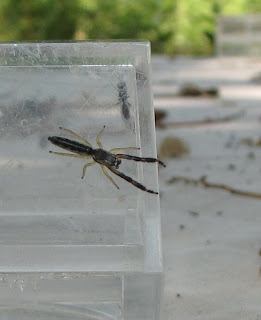