I continue to be pleasantly surprised by the diversity of wasps here on the Front Range in Colorado Springs. The multitude of plant communities, and ecosystems that change with even a moderate rise in elevation, mean there is an abundance of niches for various members of the Hymenoptera. Last Tuesday, July 10, while prowling a vacant lot in my neighborhood, I discovered yet another genus in the family Crabronidae: Hoplisoides. 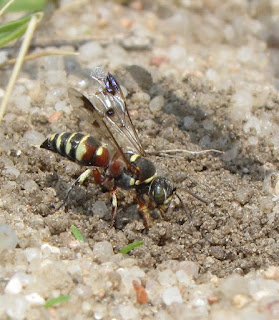 The female wasp, about 8-10 mm in length, was scratching the sandy soil at my feet when I spotted her. Initially, I thought she was a mason wasp, owing to their behavior of scraping dry soil for use in their mud nests, and the splayed wings that are characteristic of eumenids. Closer inspection of my first image revealed her to be a crabronid wasp in the genus Hoplisoides, with trademark spotted wings.

The wasp took off but flew just above the ground and eventually landed again at a spot of disturbed sand where she had apparently started digging earlier. She resumed excavating that spot and I spent at least half an hour shooting images each time she emerged from the burrow to deposit her diggings and groom the entrance to disguise the location of her nest. The behavior of digging in several spots before selecting one site to finish is apparently not unusual (Evans, 1966) 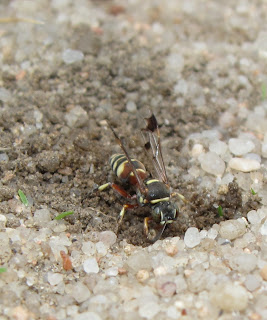 There are about eighteen species of Hoplisoides in North America north of Mexico, collectively distributed over the entire continent, including Alaska. The bulk of the species are western. Globally, the genus is found everywhere except Australia.

Most North American species hunt adult and immature treehoppers in the family Membracidae (example below) as food for their larval offspring. Females dig relatively short burrows in sand, the tunnels terminating in one or several underground cells. 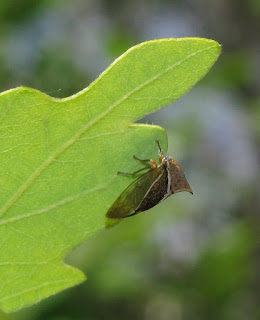 “My” wasp was preparing just such a nest, and after completing it filled in the entrance, effectively obliterating all evidence of her work. She made a low “orientation flight” before taking off to hunt prey. I only hope that she did not use me as a landmark. I could hear her “voice” later: “Dang. I seem to remember some big hulking object right here….”

She entered and exited her burrow head first, in contrast to most burrowing wasps that back out of the nest during its construction. The typical burrow descends at an angle of 45-70° for roughly ten centimeters and a depth of about six centimeters. The terminal cell or cells are about 9-11 millimeters long, and 7-9 mm in diameter. An average of 10-15 paralyzed treehoppers go into each cell, but that can vary dramatically depending on the size of each prey item. The larger the prey species the fewer are needed. A single egg is laid on the last victim to go into the cell. Most female wasps make at least a handful of individual nests in their lifetime. It should be noted that the above description pertains to Hoplisoides nebulosus, found mostly in the eastern U.S., and the species depicted here. 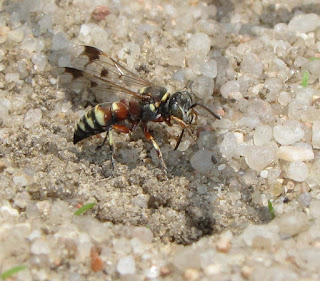 Hoplisoides do not spend much time on the final closure of their burrows, so are often victimized by parasites. The cuckoo wasp Elampus viridicyaneus is one such enemy. So are crabronid wasps in the genus Nysson. The velvet ant Dasymutilla vesta may be another parasite; and the “satellite flies” of the family Sarcophagidae (Senotainia trilineata being one) are an ever-present threat lurking in the vicinity of nests.

You will rarely see Hoplisoides on flowers, but you might find them around aphid colonies. They are fond of “honeydew,” the sugary liquid waste product secreted by aphids. Catalpa trees and oak trees are often good places to look for aphid colonies. The constant rain of honeydew will ake the leaves appear glossy or sweaty. Otherwise, encounters with these treehopper hunters are pretty much serendipitous.

Note: The wasp specimen imaged here has since been identified as Hoplisoides nebulosus spilopterus by Matthias Buck at the Royal Alberta Museum in Edmonton. Thank you, Dr. Buck! 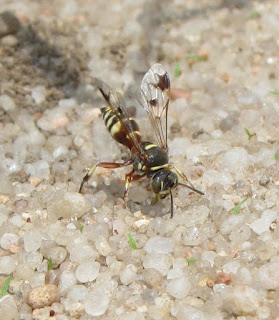