This week, July 23-29, 2012, is National Moth Week, but if you only go out looking for them at night, you are going to miss some of the most amazing moths of all. Many species of moths are diurnal, visiting flowers for nectar, or simply seeking host plants for their caterpillar offspring. 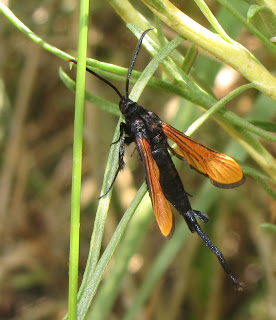 Beyond the simple fact that there are moths that fly in broad daylight, many are mimics of other insects, especially wasps, and they can be very convincing. I found the specimen above along the shores of the Arkansas River just west of Cañon City, Colorado on July 15. At first I thought it was a miniature tarantula hawk, or at least some other kind of colorful spider wasp, but it wasn’t flying quite right. When it eventually settled, I was even more excited. It is a “clearwing moth” in the family Sesiidae, specifically Alcathoe pepsioides. Special thanks to William H. Taft of DeWitt, Michigan for the species identification via Bugguide.net. The genus is found only in the New World tropics, north into the southern United States. The five species found north of Mexico are not commonly found or collected. Males like the one pictured here, each have a single tail-like appendage trailing from the tip of their abdomen. This is a good approximation of the dangling legs of a wasp. Caterpillars of these moths are borers in the stems of Clematis. 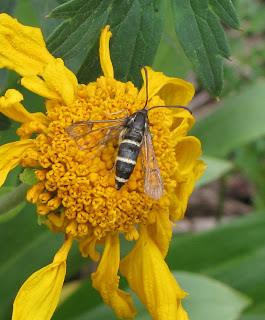 Not all sesiids are as large and spectacular. Heidi spotted the specimen above on a flower in a meadow at an elevation of over 10,000 feet in the Maroon Bells-Snowmass Wilderness near Schofield Pass in Gunnison County. It remains unidentified, as many specimens can only be determined to genus and species by examination under a microscope. It could easily pass for a mason wasp (Vespidae: Eumeninae) if one did not know better.

Clearwing moths are not the only moths to mimic wasps. Leaf-skeletonizer moths, family Zygaeidae, could be mistaken for certain spider wasps, too. The Western Grapeleaf Skeletonizer, Harrisina metallica, is deep metallic blue in color, like many wasps in the Pompilidae. Their larvae are caterpillars that reduce grape leaves to lacy shadows of their former selves. Still other zygaeids mimic the toxic net-winged beetles of the family Lycidae. Those moths are frequently bright red or orange and black. 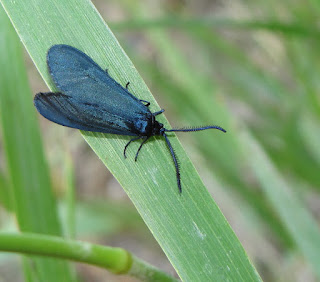 Certain tiger moths in the family Erebidae (subfamily Arctiinae, which once ranked as its own family) are likewise thought to be wasp mimics. The genus Ctenucha is perhaps the most widespread and frequently encountered, but there are even more astounding mimics in the subfamily, even some with clear wings. The Virginia Ctenucha, Ctenucha virginica, shown below, is common east of the Rocky Mountains. 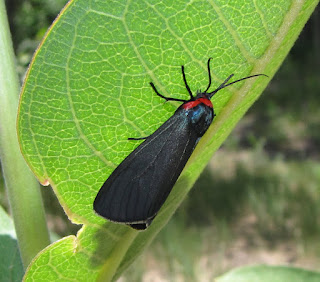 Larger moths can also be wasp mimics. The Nessus Sphinx moth, Amphion floridensis, is possibly a mimic of the Eastern Cicada Killer Wasp. The moth flies during the day, but especially at dusk, often hovering in front of flowers as it taps the nectar inside each blossom. Widespread east of the continental divide, it feeds on the leaves of grape and cayenne pepper plants as a caterpillar. 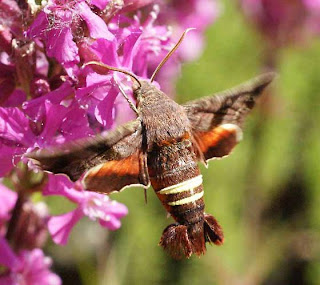 Not all day-active moths are mimics, of course. Some really do look like moths. Those in the genus Schinia are notoriously colorful, but their wardrobe often helps to camouflage them on the flowers where they rest or seek nectar. There are at least 123 species in North America north of Mexico, so at least a few are bound to occur in your own neighborhood. The caterpillars eat the flowers (and later the seed pods) of their host plant. Not all species of Schinia are diurnal, so look for them at lights at night, too. 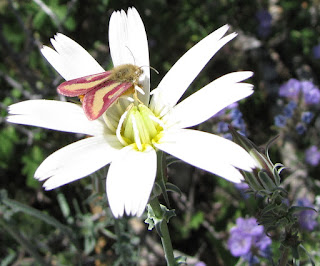 Nature can be a complex and confusing Mother, so don’t get too discouraged if you can’t tell a moth from a wasp from a beetle or a fly. Getting fooled only means that Nature’s plan is working.