Back when I wrote about the Brown Marmorated Stink Bug, Halyomorpha halys, it was an introduced species from Eurasia that was no more than an indoor nuisance pest in the U.S. in the fall and winter. It has since ballooned into a certifiable agricultural pest in apple and peach orchards, and also vineyards. So panic-stricken are government officials that congress is attempting to pass a $831,000 “farm bill” to find ways of combating the bug. Enter a native wasp, Bicyrtes quadrifasciatus, pictured below. 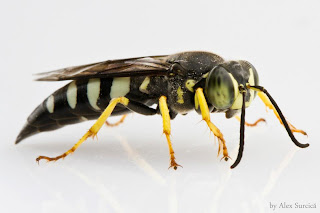 The wasp is a type of “sand wasp” that preys on true bugs in the order Hemiptera, suborder Heteroptera. Each female wasp digs a burrow in sand, and stocks the cell at the end of the tunnel with paralyzed true bugs that will serve as food for a single larval offspring. Turns out that the Brown Marmorated Stink Bug has become a favorite target of the wasp, which hunts the immature stages of the pest (see figure below). 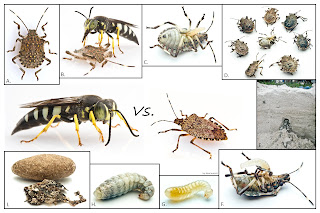 Alex Surcică has noticed this trend, and wants to document the efficiency of the wasps in controlling the bug. To that end he recently posted this message on his Facebook page:

"Seeking collaborators interested in collecting data on the nest provisioning of the sand wasp, Bicyrtes quadrifasciatus. This solitary (read non-aggressive) wasp occurs throughout North America, east of the Rocky Mountains, and it nests only in sand, along water ways or in sand volleyball courts and kids sandboxes. For making observations, one needs a garden trowel, pen, and notebook. The results of this citizen-science project will be used to assess the role the sand wasp plays in controlling the Brown Marmorated Stink Bug, a multi-million dollar pest. If interested, reply and I will send you more info. Please take an extra moment and share this with your FB friends. Thank you!"

Alex also posted a series of images on his “Bees, Wasps, and Other Beneficials” Facebook page that details how he painstaking excavates Bicyrtes nests to census the number of each prey species taken by the wasp:

“When I'm collecting data on the nest provisioning of the sand wasp, I'm waiting to see a female with her paralyzed prey entering her nest. While she's inside (sometimes can take minutes), I use a twig to mark the nest. I always position the twig three inches to the left of the nest entrance, and at a slight angle that will indicate later on where tunnel was leading to. Once the nest is marked, I search for other nests. Female sand wasps tend to initiate many nests but do not always end up using them. Therefore, I always mark only the nests that had females with prey entering them.” 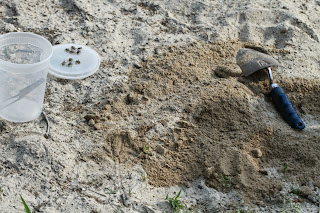 I heartily applaud Alex for attempting this endeavor; and I encourage my readers to become part of his effort. Bicyrtes quadrifasciatus is common over most of its range, and several females may nest in the same general vicinity. So, once you find one nest, you are likely to find others.

Meanwhile, the U.S. Department of Agriculture is considering importing a parasitic wasp from the geographical area overseas where the stink bug is native. Introductions of parasites as “biocontrols” have not always ended well. There is the risk that the “new” parasite from abroad will find our native, non-pest stink bugs as acceptable a host as the Brown Marmorated Stink Bug. Maybe the native bugs would be even more attractive to the parasite. That kind of scenario has happened before. 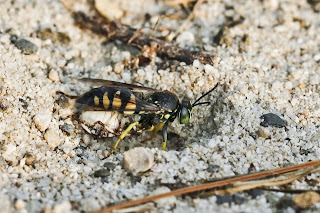 I thank Alex Surcică for allowing the use of his images in this post as well. Do check out his “Bees, Wasps, and Other Beneficials” Facebook page for more stunning photos.