NOTE: I failed to make it clear how many wasps, and even some flies, look nearly identical to this species if you are not an entomologist. There is the Blue-winged Wasp, Scolia dubia, spider wasps (Anoplius atrox and others), and even the enormous fly Mydas clavatus that are equal to or larger than Stizoides renicinctus. Stizoides renicinctus is also not nearly as common as these other wasps. So, those of you insisting you are seeing this species have likely mistaken it for something else. Thank you, and my apologies.

One of the cool “surprise bugs” from the ”wasp tree” was a kleptoparasitic wasp (I’ll explain that term below), Stizoides renicinctus. This insect is so obscure that it has no common name in English, but that doesn’t take anything away from its unique life history. 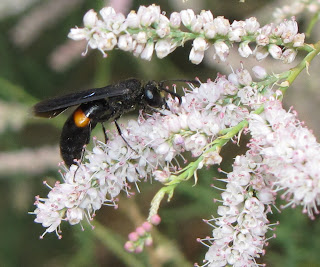 Field marks that help to identify S. renicinctus include an all black body with a red or orange band on the second dorsal abdominal segment (tergite), dark wings with translucent wingtips, and an overall elongate appearance. Both genders are nearly identical in appearance and size, at about 16-18 millimeters.

One usually encounters the males taking nectar from flowers. I was surprised at the fair number of them on the saltcedar tree during the latter half of June here in my Colorado Springs neighborhood. I have also seen this species in southern Arizona, coming to the blossoms of Seepwillow, Baccharis salicifolia in dry arroyos or along rivers. 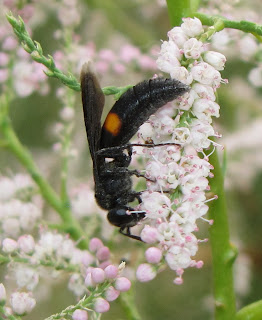 Females are mostly busy seeking hosts for their offspring. The term “kleptoparasite” refers to an animal that essentially raids the refrigerator of its host organism. That means the parasite feeds on the material stored as food by its host. S. renicinctus is known to exploit the food caches of other solitary wasps in the genera Prionyx and Palmodes. Female Prionyx hunt grasshoppers (Acrididae), while Palmodes hunts katydids (Tettigoniidae). The wasps dig burrows and stock at least one prey item per cell that a single larva will consume to grow and mature into an adult wasp of the next generation. The female Stizoides renicinctus locates the closed burrow of a host, digs it open, destroys the host egg, and replaces it with one of her own. The larva that hatches will eat the food the host mother wasp took such care in providing.

It has been noted that S. renicinctus is not always solitary. Individuals will gather in “sleeping” clusters on vegetation at night. They apparently do this in the face of impending inclement weather, too. I found a loose aggregation forming in the saltcedar bush on the afternoon of June 16 as storm clouds began to gather. These wasps will sometimes be found amid sleeping clusters of other solitary wasps as well. 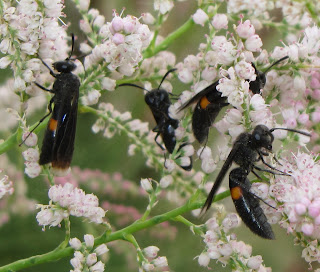 These wasps are quite efficient parasites, as documented by I. LaRivers in a 1945 paper in American Midland Naturalist. He found the species parasitizing Palmodes laeviventris in Elko County, Nevada. The Palmodes were doing local agriculture a service by slaying Mormon crickets (a type of wingless katydid), but the Stizoides wasps were also reaping the benefits. LaRivers estimated a parasitism rate of about 7.5 percent, which he extrapolated to roughly 10,000 destroyed Palmodes nests in about 350 square yards.

Ok, so Stizoides is an outlaw of the Old West (it actually ranges from Michigan and Wisconsin south to North Carolina and west to Alberta, British Columbia, California, Arizona, and Mexico). I would like to think that seeing a good number of specimens means that there is also a thriving population of host wasps. That in turn means abundant grasshopper prey, and thus a healthy habitat.

Be on the lookout for Stizoides where you live, and see if you can find one in the act of finding a host. You may discover a relationship previously unknown to science. You just never know. 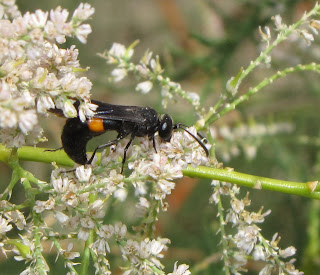