When Heidi and I went to South Carolina early last May, one of the animals on my “hope to see” list was the Whitebanded Fishing Spider, Dolomedes albineus. It took until the last day of our trip, but I finally found one at the Whack-a-Mole Natural….Wait, that’s not right. The Whatchamacallit National….No….Ah, yes, the Waccamaw National Wildlife Refuge. 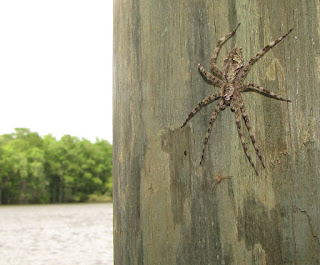 The spider was sitting on a piling supporting a floating dock on the Pee Dee River. This is not a small spider. Mature females measure about 23 millimeters in body length (just under an inch). Males average 18 millimeters. Ordinarily, the spider’s mottled gray pattern blends perfectly with lichen-spotted tree trunks where it waits in ambush for an unsuspecting insect or other small animal to wander within striking range.

This particular arachnid perceived motion very well. I ended up chasing it around the piling before it finally settled down. Oddly, it did not bolt, but simply sidled slowly to a new position on the piling. Creepy. Creepy in a creeping, stealthy, smart kind of way.

The white band that gives this spider its common name is the area immediately under the eyes and above the chelicerae (jaws). Maybe it should be called the “whitefaced fishing spider” instead. Sometimes the entire carapace (dorsal surface of the cephalothorax) is white, save for a black spot in the center. Indeed, the color pattern of this species is highly variable. Some individuals are even a mossy green color with darker markings. 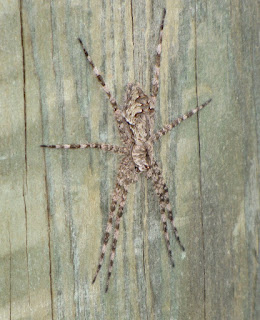 This is a fishing spider that really is most common along the edges of aquatic habitats, especially the cypress swamps of the southeast U.S. Its geographic range is from Florida inland and north to the Appalachian Mountains of North Carolina, as well as the Mississippi River basin as far north as Kentucky and southern Missouri.

Not much is known about the life history, habits, and behavior of this species, so your own observations might lend something new to science. At least one researcher, James Carico, noted that adults sometimes congregate in tree holes and crevices, perhaps in a “mating swarm,” though that would be a rare behavior for most arachnids (Carico, 1973).

Like all pisaurids, D. albineus females carry the egg sac in their jaws before eventually creating a “nursery web” amid foliage, bridge beams, or other situations. The female then guards the egg sac and the spiderlings that emerge from it. Once the spiderlings have their first molt outside of the egg sac, they disperse. Their mother then resumes hunting, having fasted during her parental duties. 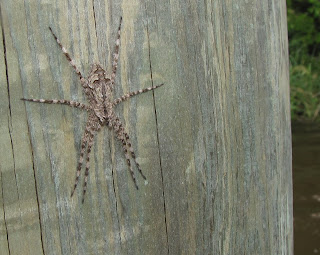 I consider myself lucky to have seen this magnificent spider, and I hope that you will add it to your own “must see” list of arachnids. You do have one of those by now, right?