Turn on an outdoor light anywhere in the eastern U.S. at night at this time of year and you are likely to attract one, if not several, individual males of the assassin bug known as the “Black Corsair,” Melanolestes picipes. Why only males? More on that in a moment. What are they doing there? They are likely looking for other insects to prey upon. 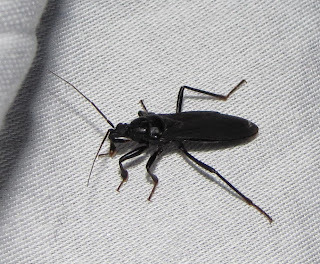 This species exhibits what is called sexual dimorphism. Adult males are fully winged and are strong fliers. Females usually lack hind wings and have the front wings reduced to mere pads, though there are exceptions. They are nocturnal, like the males, hiding under stones, boards, and other objects by day. 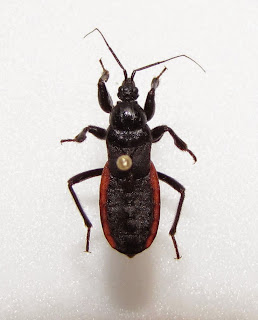 This is among one of the most abundant assassin bugs in the United States, found from New England to Florida, and west to Colorado, Utah, and California. It is often confused with the Masked Hunter, but the Black Corsair averages smaller, at 15-20 millimeters in body length.

Most specimens from the northern part of its range are wholly jet black, but southern specimens may have a red or orange edge to the abdomen, or even have the abdomen entirely red. Those specimens are sometimes confused with the bordered plant bugs I wrote about last week. The red-bordered forms of Melanolestes picipes were formerly considered a separate species, M. abdominalis. The two are now recognized as a single species. 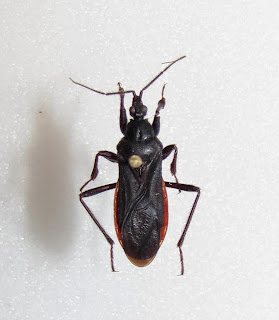 A highly distinctive feature of these agile assassin bugs are the “ankle weights” or “leg-warmers” they seem to be wearing on the first and second pair of legs, at the distal end of the tibial (“shin”) segment. The inflated attribute is called the fossula spongiosa, a pad composed of a dense mat of hairs, with pores beneath them that exude a thin film of oil to the flared tips of the hairs. The whole affair allows the bug to chase prey over slick substrates, cling to struggling victims, and grip a mate in the case of males. 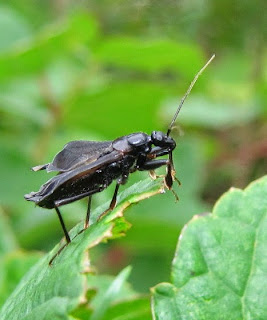 M. picipes from Cape May, New Jersey, after a bad molt

Be careful that you don’t ever mindlessly swat one of these insects if it lands on you. The defensive bites of assassin bugs in general are excruciating, and the odds of being bitten go up when the Black Corsair comes to town. Because they are attracted to lights, and run and fly with great speed and agility, the males may find their way indoors.

It is just this scenario that played out in the notorious “kissing bug scare” in the summer of 1899 in the eastern United States. Accounts vary, some stating the panic began with a single incident of a woman being bitten in Washington, DC (Freiberg, et al, 1984); others claiming there really was a higher incidence of bites from bugs that year. That sensationalized newspaper reporting helped fan the flames of paranoia is a subject of unanimous agreement. Whether the assassin bug responsible was the Black Corsair, or the Masked Hunter, neither species would have been lusting after human victims, simply looking for insect prey in the wrong places. 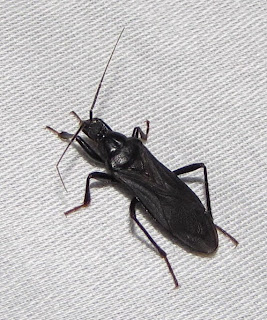